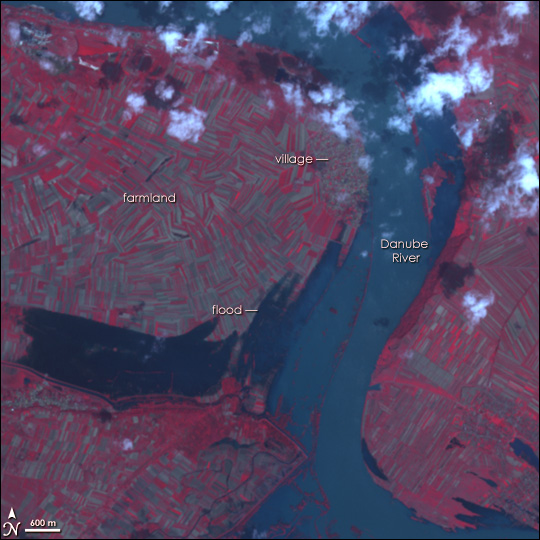 The Danube River spills over into farm fields in the northeastern corner of Serbia in this image, taken by the Advanced Spaceborne Thermal Emission and Reflection Radiometer (ASTER) on NASA’s Terra satellite on April 24, 2006. Though water levels on the Danube River in Eastern Europe had been expected to fall by this time, the river was still running high on April 24. Melting snow and spring rain have driven rivers across Central Europe over their banks, causing widespread flooding. High water levels on the Danube forced evacuations throughout Serbia, Romania, and Bulgaria in late April 2006, according to news reports.

In the region shown here, a small village is nestled within a bend in the river. Streets, houses, and exposed earth form a tight grey grid within the village, interrupted by occasional red squares where plants are growing. The rest of the land in the scene is covered with long, rectangular agricultural fields. Bare fields, as yet unplanted, are grey, while those in which crops are growing are red. The river, blue, seeps over its banks and across the fields in the center of the image. Smudges of blue along the banks of the river in the village hint that flooding may be occurring here too, though the darker colors may also be shadows cast by the small clouds overhead. On April 23, Reuters reported that some 225,000 hectares of Serbia’s farm land, about 5 percent of the arable land in the country, had been flooded or threatened by floods.

Numerous images of floods in Central Europe can be found in the Earth Observatory’s Natural Hazards: Floods section.