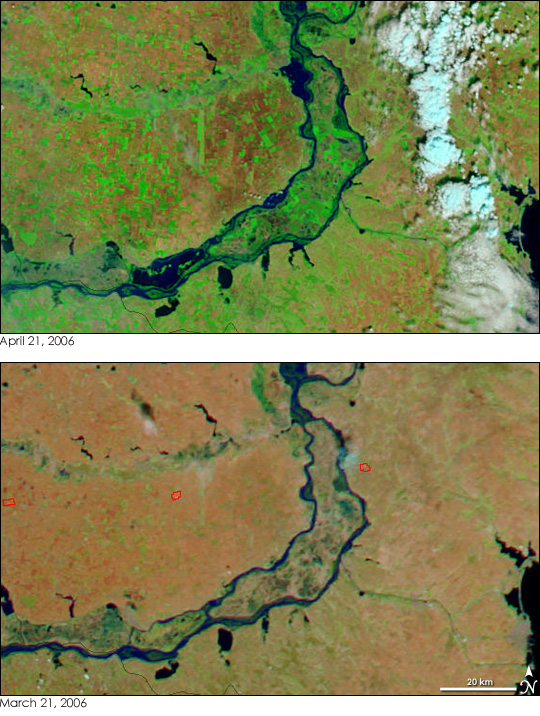 The powerful rush of spring runoff that bulged in the Danube had made its way into the final kilometers of Europe’s second-longest river by April 21, 2006. Vast tracts of land were under the record-setting floods when the Moderate Resolution Imaging Spectroradiometer (MODIS) on NASA’s Terra satellite acquired the top image. The lower image shows the region one month earlier, before the river flooded. More than 300,000 hectares (740,000 acres) of land along the Danube in Serbia, Romania, and Bulgaria had been submerged in the flood by April 21, reported Reuters. This image shows a section of the river in eastern Romania. Most of the flood water seems to be surging through the Borcea River, the smaller river that branches off the west side of the Danube in this image. The point where the two rivers converge is entirely underwater, as are many areas along the Borcea. Land along the south and eastern side of the Danube has also been flooded.

These images are shown in false color to highlight the presence of water, which is black or dark blue. The false color combination also highlights vegetation. Bright green squares in the left half of the image show where crops are growing in rectangular fields. Bare earth is pink, and areas that have been burned are brick red. Agricultural burning is common in this region, and in fact, a few fires were burning when Aqua MODIS acquired the lower image on March 21. The fires have been marked with red squares. Clouds are pale blue and white.

Water levels on the Danube were expected to rise further on April 22 and April 23, and Romanian officials were preparing to breach another dike in the river’s delta to alleviate the impact upstream. Daily images of the floods are available from the MODIS Rapid Response Team.