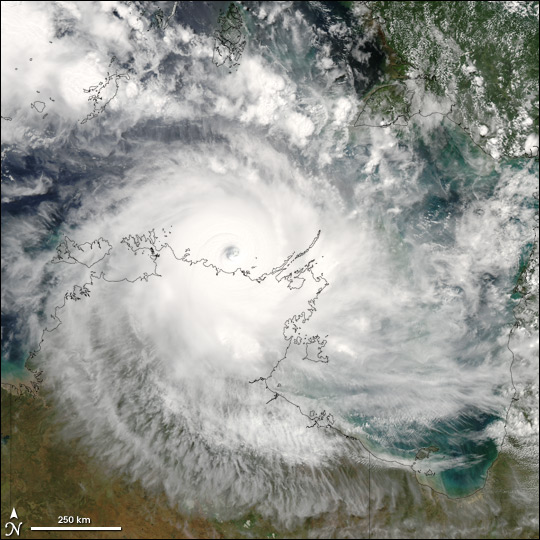 Tropical Cyclone Monica formed off the northeastern coast of Australia on April 17, 2006. This is the same general area where Cyclone Larry formed a month earlier. On April 19 and 20, Cyclone Monica crossed Cape York Peninsula with weaker winds than Larry, and its path in northern Queensland took it well away from most settled areas. However, Monica’s second act proved quite different. The cyclone gathered size and power in the Gulf of Carpentaria and rebuilt into a Category 5 storm. Monica grazed across the top of the Northern Territory, threatening communities throughout Arnhem Land, Kakadu, and the city of Darwin with heavy rains and very high winds. Many Australian news services were comparing Monica to 1974’s powerful Cyclone Tracy which flattened Darwin and was the most devastating storm to ever hit Australia.

This photo-like image was acquired by the Moderate Resolution Imaging Spectroradiometer (MODIS) on the Aqua satellite on April 24, 2006, at 2:00 p.m. local time (04:30 UTC). Cyclone Monica at this time was an impressively large and powerful storm. Sustained peak winds in the storm system were roughly 285 kilometers per hour (180 miles per hour) around the time the image was captured, and gusts reached as high as 350 km/hr (220 mph). These winds put Monica firmly in the rare and most powerful, Category 5, rating. The eye of the storm appears like a deep whirlpool hovering just off the Australian coastline.

Monica was predicted to come ashore again on the Coburg Peninsula and to strike Darwin on April 25. Ordinarily, Australians observe Anzac Day on April 25 (honoring Australians who served in the First World War), but throughout the Northern Territory, all services and events were cancelled.

Tropical Cyclone Monica formed off the northeastern coast of Australia on April 17, 2006. This is the same general area where Cyclone Larry formed a month earlier.