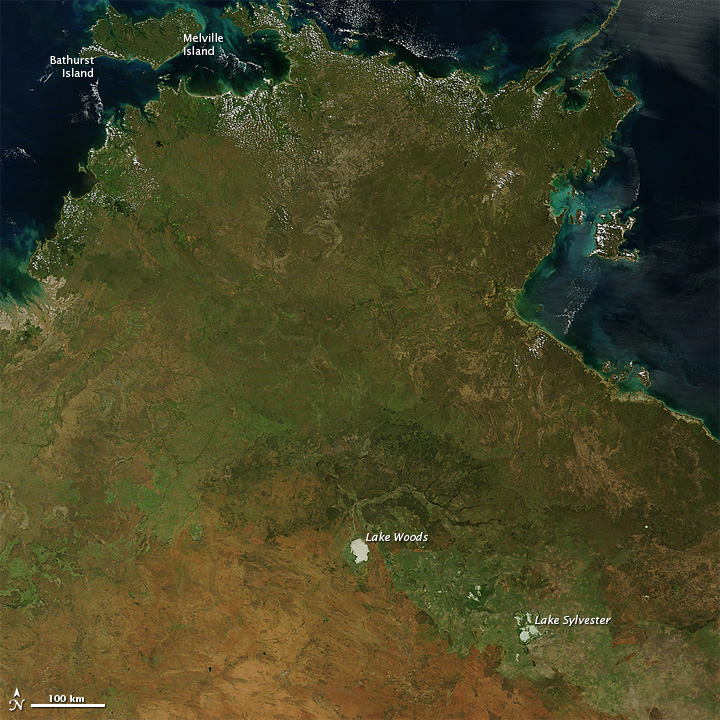 On April 3, 2012, sunny skies afforded the Moderate Resolution Imaging Spectroradiometer (MODIS) on NASA’s Terra satellite an unimpeded view of Australia’s Northern Territory, revealing changes in land cover from the Outback to the coast.

In the southern part of this state, shrublands predominate. They are interrupted by isolated salt lakes such as Lake Woods and Lake Sylvester, which glow nearly white. Toward the north, shrubs give way to woodlands and forests. Dense rainforest predominates on Bathurst and Melville Islands.

Not surprisingly, temperature and rainfall averages vary from north to south as well. Along the coast, some areas receive upwards of 2,000 millimeters (80 inches) of rain a year, while some areas in the south receive only a tenth of that amount. In the month before MODIS acquired this image, areas along the coast received as much as 400 millimeters (16 inches) of rain, while isolated patches in the south received none. Temperatures are generally warm throughout the region, but closer to the coastline, they are slightly milder than in the arid interior.

Differences in rainfall and vegetation have driven differences in land use, with more regions along the coast set aside for conservation, and large areas in the south used for livestock grazing.

Acquired April 3, 2012, this natural-color image shows changes in landscape in Australia’s Northern Territory, from the outback in the south to the rainforests in the north.