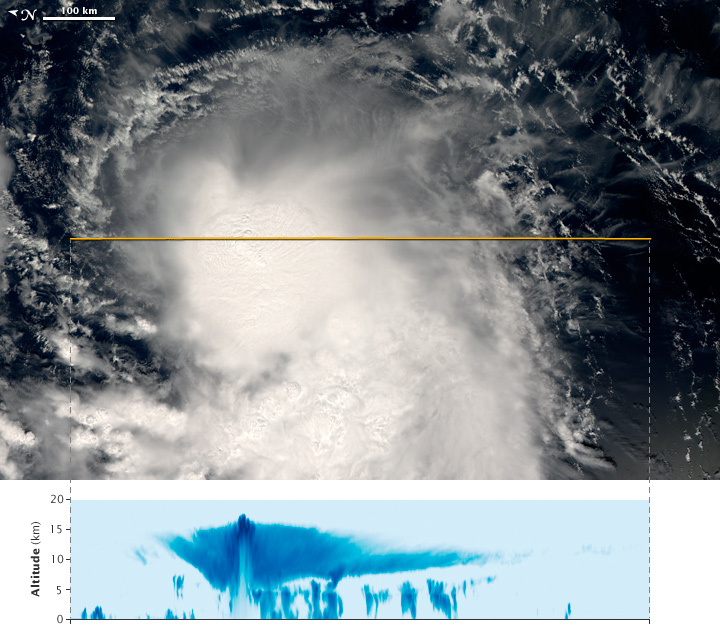 On August 30, 2012, Tropical Depression Twelve turned into Tropical Storm Leslie. The storm further strengthened into Hurricane Leslie days later. When the Moderate Resolution Imaging Spectroradiometer (MODIS) on NASA’s Aqua satellite flew over the system on August 31, it appeared as a fairly uniform mass of clouds. But to the CloudSat satellite, the picture was more complex.

These images show Leslie as it was observed by MODIS (top) and CloudSat (bottom) on August 31, 2012. The MODIS image has been rotated so that north is toward the left. The yellow line is the north-to-south track that CloudSat took over the storm. The lower image is a radar profile of the storm structure.

CloudSat sends out pulses of energy, and when that energy bounces off the surface of the ocean or particles in the atmosphere, the echoes provide an internal view of cloud structure. The radar picture shows how the storm would look if it were sliced down the middle and viewed from the side.

CloudSat flies in close formation with the Aqua satellite, so it views storms such as Leslie at almost the same time. In the MODIS imagery, cloud peaks in the storm are hard to discern. In the storm profile from CloudSat, the cloud peaks are clear. CloudSat recorded cloud tops reaching more than 17 kilometers (11 miles) into the atmosphere. In general, higher cloud tops mean cooler clouds, so altitude profiles from CloudSat not only give a picture of the structure but also the temperatures.

As of September 7, Leslie had the potential to affect a NASA-sponsored research cruise taking place in the same region: the Salinity Processes in the Upper Ocean Regional Study (SPURS). Meanwhile, the Hurricane and Severe Storm Sentinel Mission (HS3) flew a Global Hawk robotic plane around the edges of Leslie on September 7. 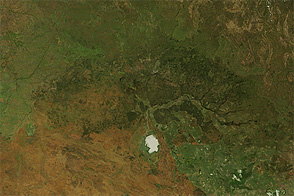 In early September 2012, Leslie became the sixth Atlantic hurricane of the 2012 season. 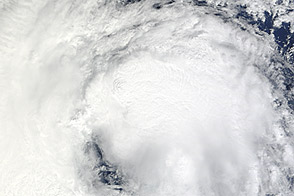