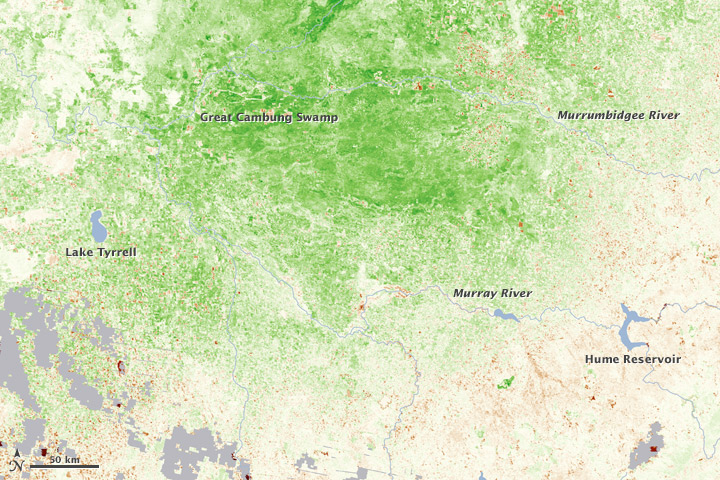 Late 2010 dealt farmers in Australia’s “Wheatbelt” a change in fortune. After three consecutive years of drought, rains finally drenched southeastern Australia. August brought record-setting precipitation to parts of New South Wales and Victoria, and September 2010 was Australia’s wettest September on record. September rainfall totals in the “Wheatbelt” ranged from average to significantly above average, according to the Australian Bureau of Meteorology.

This vegetation image shows how plants responded to the rainfall along the border between Victoria and New South Wales, in the Murray River basin. It was made from measurements taken by the Moderate Resolution Imaging Spectroradiometer (MODIS) on NASA’s Terra satellite between September 7 and 22, 2010, compared to average conditions during the same period from 2000 to 2009. The image is the latest installment in the Earth Observatory’s World of Change: Drought Cycles in Australia.

Green dominates the 2010 image, indicating that plants were growing more robustly than the average for most of the region. Fields of crops form tiny squares and rectangles; natural vegetation is smoother and more continuous. In general, the natural vegetation responded to the rain more than nearby crops, though this may be a matter of timing. Many of the crops that grow in northern Victoria and southern New South Wales—including corn, sorghum, rice, cotton, millet, and potatoes—are usually planted beginning in September or October. The fields that show little response to the rain may have been planted with one of these crops or may be fallow for the year. Primary grain crops (wheat, barley, and oats) are usually growing by September.

The abundant rain made conditions for some crops ideal. As the end of the planting season neared in December, Australia was looking at the possibility of a record cotton harvest. The rain also helped refill reservoirs that had dwindled during the drought, making more water available for irrigated crops.

The rain also had negative consequences. Rivers throughout eastern Australia flooded. The lush vegetation and water supply created habitat for plague locusts; swarms of them were reported along the Murray River in early December.

By December 8, Australia had recorded its wettest spring on record. The unusual rainfall was caused by La Niña, which warms ocean temperatures north of Australia and strengthens trade winds, bringing rain to northern and eastern Australia. La Niña and its counterpart El Niño are major factors driving the cycles of drought and rain in eastern Australia.

NASA images by Jesse Allen and Robert Simmon, based on data provided by Inbal Becker-Reshef, with the Global Agriculture Monitoring Project. Caption by Holli Riebeek.