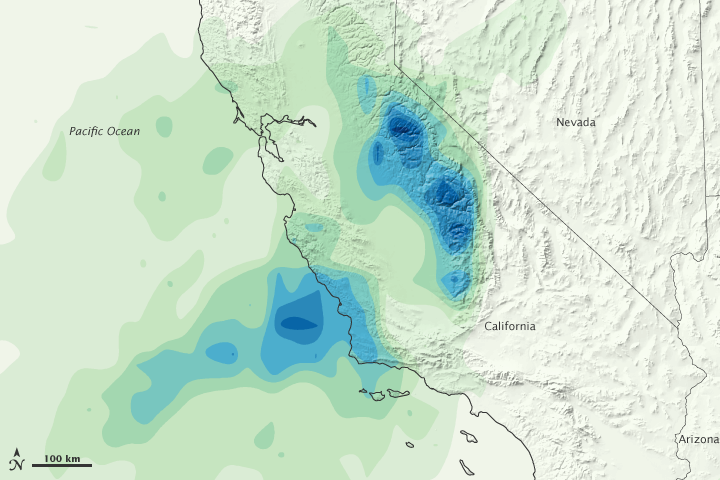 While snow and ice has blanketed much of Europe and the U.S. Midwest, California has been deluged by rainfall that is approaching records for the month of December. News media reported more than 5 inches of rain over much of Los Angeles since the storms began on December 16, with some areas in the nearby mountains reaching 13 inches. The average for the month in the city is typically around 2 inches.

This image shows rainfall amounts over California from December 18 to 20, 2010. The heaviest rainfallâ€”more than 200 millimeters or 7.8 inchesâ€”appears in dark blue. A large swath of the state from San Francisco to Los Angeles totaled at least 100 millimeters, with the heaviest precipitation near the coast and in the Sierra Nevada (where several feet of snow fell). The data represents rainfall averaged over large areas (0.25 degrees of Earth's surface), so extremes in local rainfall get smoothed out in the larger picture of the region.

This image is based on data from the Multisatellite Precipitation Analysis (MPA), produced at NASA’s Goddard Space Flight Center. The MPA estimates rainfall by combining measurements from many satellites and calibrating them using rainfall measurements from the Tropical Rainfall Measuring Mission (TRMM) satellite.

The rainfall is a fitting end to a year of unusual weather in southern California, where the spring and summer were cooler than usual, Santa Ana winds were calmer (making for a light fire season), and a one-day temperature record was set in September (117 degrees Fahrenheit). Extensive research suggests weather patterns become more volatile and extremes become more common as global temperatures warm, notes Bill Patzert of NASA's Jet Propulsion Laboratory.

Forecasters were predicting that a cold front from the Gulf of Alaska was going to move down the coast on Tuesday, and the collision of cool northern air with the existing warm, wet air mass was going to bring the heaviest rainfall yet. Another storm is forecast for the weekend. The record for December rainfall in LA is 8.77 inches.

California has been deluged by rainfall that is approaching records for the month of December.