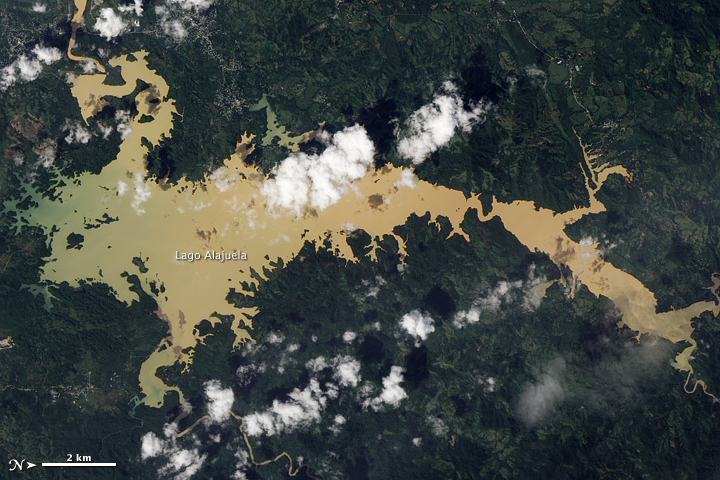 In early December 2010, the Panama Canal closed for only the third time in its 96-year history. Two artificial lakes linked to the canal, Gatún and Alajuela, reached their highest-recorded water levels, prompting authorities to close the canal for 17 hours on December 8-9.

Lago Alajuela serves as a reservoir for the Panama Canal, which lies to the lake’s southwest. On December 17, 2010, the Advanced Land Imager (ALI) on NASA’s Earth Observing-1 (EO-1) satellite captured this natural-color image of Lago Alajuela. This image has been rotated so north is to the right. The canal lies off the top left corner of the image.

Panama is accustomed to heavy precipitation. The rainy season lasts from May to January. The Panama Canal actually depends on huge quantities of water—each trip through the canal requires some 52 million gallons. Still, heavy rains in early December 2010 overwhelmed the region. The same rains that raised Lago Alajuela’s water level and filled it with sediment also forced thousands of residents to evacuate, washed out roads, and caused deadly landslides.