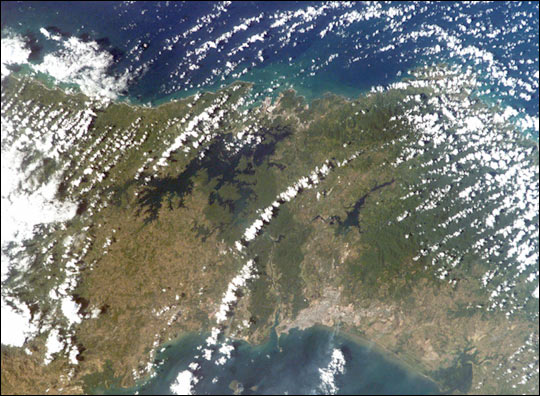 The Panama Canal is a 50-mile long engineering wonder connecting the Caribbean Sea and the Pacific Ocean. Completed by the United States in 1914, it runs southeastward from Colon, through the man-made Gatun Lake, to Panama City on the Pacific side of the Isthmus of Panama. The canal, a major artery of international shipping, uses a series of massive locks, manmade lakes, and water supplied by the copious tropical rainfall of the region to lift and lower transiting ships a height of 85 feet over the continental divide.

Thick rainforests border the canal, and the protected Canal Zone is easily delineated by the dark green band of forest, which contrast the lighter green cultivated areas of Panama. The ecologically sensitive Canal Zone supports diverse lowland rainforest that is crucial for water balance and erosion/siltation control around the canal. Scientists monitor the edges of the Canal Zone rainforest for degradation from development.

The crew of the International Space Station acquired this image on the afternoon of January 30, 2003, using an electronic still camera with 85 mm lens. Fair-weather cumulus clouds from the Caribbean can be seen pouring southward through the natural gap in this mountain chain of Central America.

Astronaut photograph ISS006-E-23743 was taken with an Electronic Still Camera equipped with an 85 mm lens, and is provided by the Earth Sciences and Image Analysis Laboratory at Johnson Space Center. Additional images taken by astronauts and cosmonauts can be viewed at the NASA-JSC Gateway to Astronaut Photography of Earth.