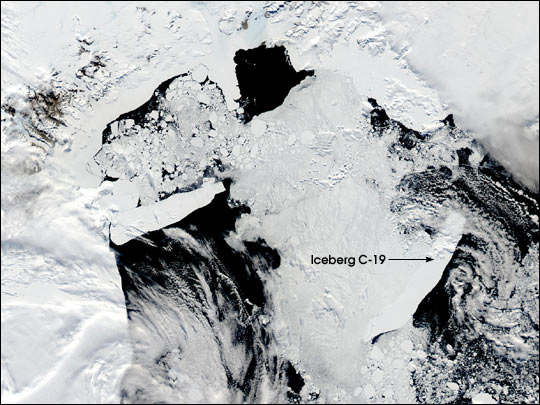 When the sun rose over Antarctica after months of polar darkness, it revealed that a new, large iceberg had calved off the Ross Ice Shelf (bottom left) during Antarctica’s long, dark winter. A companion to the B-15 iceberg (left of center) that had been anchored near Ross Island since 2001, the new iceberg, known as C-19, calved off the shelf in May 2002 and drifted northwestward in the darkness, becoming stationary at a right angle to B-15, where it remained for many months.

Between September (when the sun rose) and late October, C-19 drifted several hundred kilometers north, where it once again seemed to run aground. The berg was nearly stationary throughout November, December, and the first half of January 2003. This unusual position of the two large bergs may have disrupted normal ocean circulation that clears the Ross Sea of seasonal ice during the first months of Austral summer (Northern Hemisphere winter).

Imagery from the Moderate Resolution Imaging Spectroradiometer (MODIS) on the Terra satellite revealed an unusual build up of sea ice in the waters of the Ross Sea near Ross Island. The island is home to the National Science Foundation’s McMurdo Research Station, the United States’ Antarctic research hub. The seasonal ice remained in the sea longer than expected, and created trouble for ships trying to bring in supplies to the research station. Ice was so thick that in early January, the U.S. Coast Guard was forced to send out a second icebreaking ship to assist the one that had gone out with the McMurdo resupply ship.

Then, after months of stillness, a January 14 image from MODIS revealed that C-19 was again on the move. Over little more than week, the huge berg pivoted northward from its eastern end. The effect was like opening a floodgate, and much of the sea ice trapped in the Ross Sea between C-19 and B-15 poured out into the Southern Ocean. The animation provided here shows the B-15 (left) and C-19 (center) icebergs in the Ross Sea and the movement of C-19 between September 22, 2002, and February 3, 2003. C-19 drifts from the center of the scene out to the far right edge.

Icebergs in the Ross Sea, Antarctica