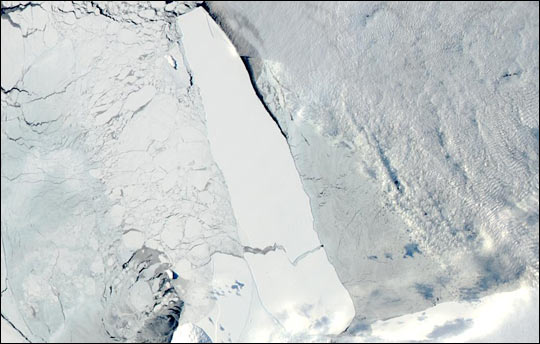 A massive iceberg that had been blocking traditional shipping routes to McMurdo Station, the National Science Foundation’s research station in Antarctica, snapped in two seemingly overnight. The B-15A iceberg seemed to be intact in the Terra MODIS image recorded on October 7, 2003. But this true-color Moderate Resolution Imaging Spectroradiometer (MODIS) image captured by the Terra satellite on October 9 shows the iceberg in two pieces. The largest section, top, is about 75 miles long, and the shorter section is 20-25 miles long.

The B-15A iceberg broke off the Ross Ice Shelf in 2000 and drifted to its present location. It and a second large iceberg, C-19, trapped sea ice in the passage that supply ships typically used to get to the research station on Ross Island. C-19 swung out to sea in 2002, freeing some of the trapped ice. Scientists at the University of Wisconsin-Madison who first noticed the recent break say that it is unclear how B-15A’s break-up will affect previously trapped ice.

The Ross Ice Shelf is a vast field of snow and ice extending from the continent into the Ross Sea on the western Pacific coast of Antarctica. As glaciers slide off the continent and push the shelf out, the outer edges crumble into a myriad of icebergs such as B-15A.