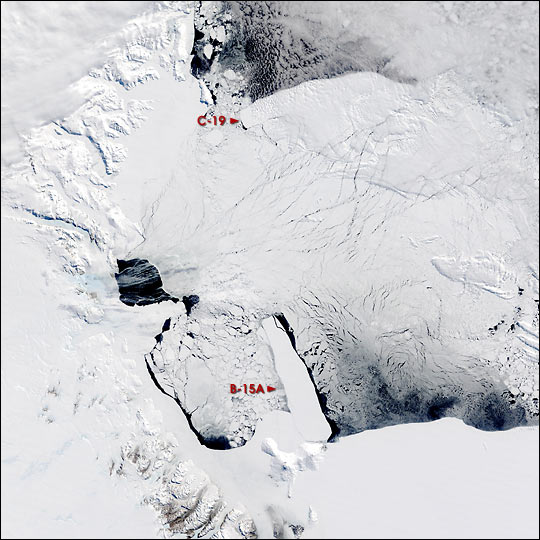 Over the past two and a half years, several unusually large icebergs have calved off of the Ross Ice Shelf in Antarctica. While some have made their way out into the Pacific Ocean to melt, others continue to shift and float slowly through the Ross Sea. Three of these icebergs can be seen in the above image, taken on November 17, 2002, by the Moderate Resolution Imaging Spectroradiometer (MODIS) aboard NASA’s Terra satellite.

Mainland Antarctica lies across the left side of the image. A broad mountain range extends along its coast. The Ross Ice Shelf is the solid, uniform white mass on the lower righthand corner of the image. The icebergs, which broke off from the shelf, can be seen clustered together at the southern edge of the gray, mottled Ross Sea north of the ice shelf.

Iceberg B-15A is in the center of the image about a third of the way up into the image and resembles a tall bottle resting on the Ross Ice Shelf. B-15A was part of the larger B-15 iceberg that was the size of Connecticut when it calved from the Ross Ice Shelf in March 2000. Since then, the iceberg split into several sections. B-15A is now trapped by water currents against Ross Island—the small, L-shaped mountainous outcropping near the edge of the Ross Ice Shelf. Nestled between B-15A and the island is iceberg C-16, which also calved from the ice sheet in March 2000. Both icebergs could become dislodged when the weather warms.

Iceberg C-19 formed most recently, breaking free of the shelf in May of this year. The iceberg resembles a solid white finger pointing toward Antarctica, parallel to the edge of the ice sheet and about two thirds of the way up in the image. Two months ago C-19 sat right next to B-15A. C-19 has been moving north away from the ice shelf slowly since. Should the iceberg continue its trek, it may reach the Pacific, splinter, and become a hazard for shipping in the southernmost Pacific.

Though all three of the icebergs are larger than normal, the calving of icebergs is a natural process. Ice shelves form when slow moving glaciers on land flow into the sea. The stiff ice stretches out on the sea as a thick sheet. The more rapidly ice is fed to the shelves, the larger they become. The ice shelf gradually grows thinner farther from shore until cracks within the ice and tidal forces succeed in breaking off pieces, creating icebergs.

The calving of these icebergs does not cause the seas to rise since the ice shelf already floats on the sea. Scientists are concerned, however, if the Ross Ice Shelf becomes unstable, it could disintegrate in much the same way as the Larson B Ice Shelf did last spring. There is evidence to suggest that ice shelves act as a brake for the glaciers that pour into them. Without the Ross Ice Shelf in place, the glaciers that feed it may begin pumping ice into the sea at a faster rate, which could raise sea levels. Scientists will be watching the Ross Ice Shelf and the loose icebergs as summer approaches in the Antarctic.