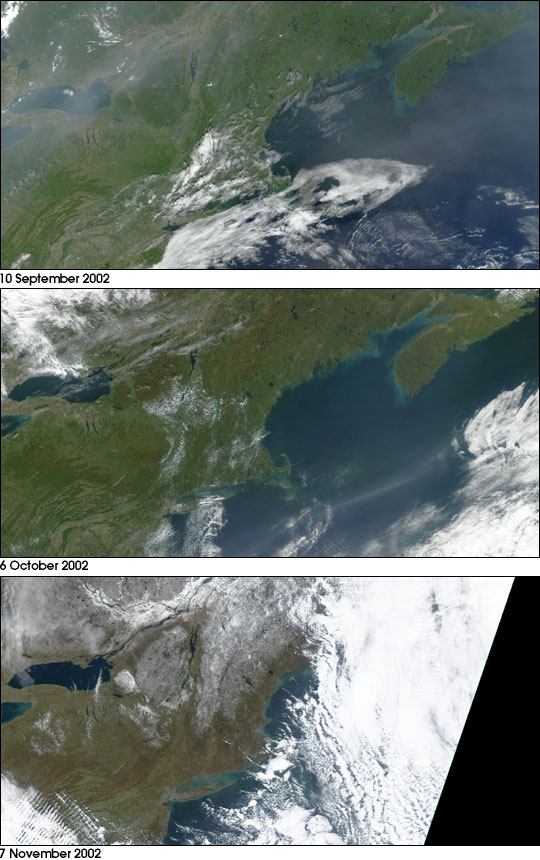 animations
MOV animation (3.22 MB)
MPEG animation (2.9 MB) Autumn’s southward march across the forests of the eastern U.S. proved difficult to document by satellite this year. Storms, persistent cloudiness, and poor air quality made getting a peek at the developing fall colors challenging. These true-color images (and animations) show some of the Terra satellite’s best views of the season’s progression, captured by the Moderate Resolution Imaging Spectroradiometer (MODIS).

In mid-September, when the series begins, the only hint of change to come is a drabness of the normally deep green color that stretches from Nova Scotia, Canada, (top right) down through New England and past Lake Ontario (left), and into Pennsylvania (bottom left). By early October, a hint of color had moved southwestward from southeastern Canada into Maine, New Hampshire, Vermont, and New York. By early-November, a snow storm had covered these areas, while snow-free areas far to the south had turned a deep, rich brown. At the bottom left of the final image, a few swaths of pale green can still be seen in the low-lying areas between the Appalachians and the Atlantic Coast.

Air pollution plagues the region off and on during this period. A haze of aerosols stretches across most of the first image and wafts over the Atlantic off the coast of Massachusetts in the center image.