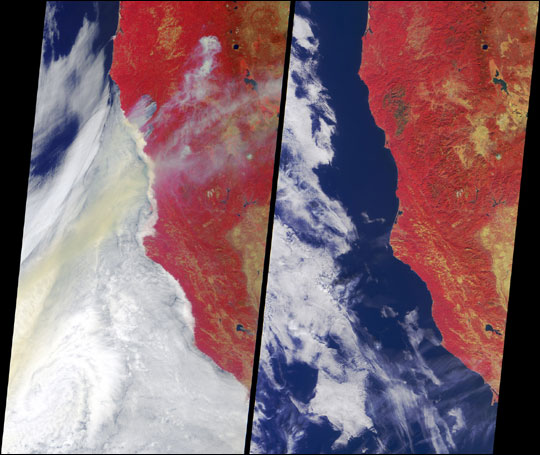 Ignited by lightning strikes during a record-breaking heat wave, the Biscuit Fire became Oregon's largest wildfire of the past century. Between mid July and early September 2002, it consumed almost 500,000 acres in southern Oregon and northern California. This image pair from the Multi-angle Imaging SpectroRadiometer (MISR) portrays the fire underway and the burn scars on the landscape after the event. Vegetated regions appear red in these false-color views, which were acquired by MISR's vertical-viewing (nadir) camera. Data from the near-infrared, red and blue bands, are displayed as red, green and blue, respectively. This display technique accentuates the contrast between burnt and unburnt areas.

The left-hand panel captures parts of southern Oregon and northwest California as they appeared on July 29. Smoke plumes emanate from several sections of the Biscuit Fire near the Oregon-California border. Numerous other fires were also burning across Oregon, sending large amounts of smoke seaward over a cloud deck in the Pacific Ocean.

The right-hand panel portrays the same geographic area on October 29, about seven weeks after the fire had been fully contained. A large, dark-colored burn scar at the site of the Biscuit Fire indicates the area consumed, which included almost the entire Kalmiopsis Wilderness Area and parts of the Siskiyou and Six Rivers National Forests. The fight to suppress the Biscuit Fire was the most expensive fire fighting effort in Oregon's history, with more than 6,000 personnel assisting the battle to suppress the fire and protect thousands of threatened homes.

The Multi-angle Imaging SpectroRadiometer observes the daylit Earth continuously and every 9 days views the entire globe between 82 degrees north and 82 degrees south latitude. These data products were generated from a portion of the imagery acquired during Terra orbits 13899 and 15297. The panels cover an area of 380 kilometers x 704 kilometers, and utilize data from blocks 56 to 60 within World Reference System-2 path 46.