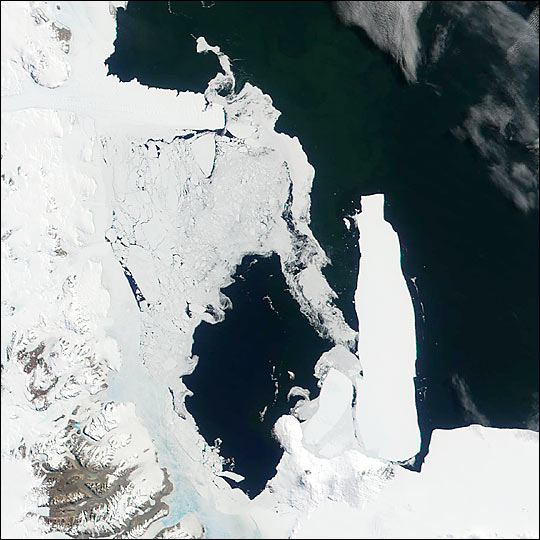 This true-color scene is situated along Antarctica’s Scott Coastline (toward the west, or lefthand side, of the image), looking out toward the Ross Sea (eastward, or toward the right). Near the top of the image, the Drygalski Ice Tongue juts eastward roughly 80 km (50 miles) out from the coast. Just below this ice tongue is a cluster of large icebergs surrounded by a large bed of sea ice. The large, coke bottle-shaped iceberg toward the lower right was named B-15 by scientists; it captured the attention of the news media last year when it broke off from the Ross Ice Shelf and began drifting out to sea. Its progress was impeded by Ross Island (bottom center), which eventually contributed to breaking B-15 almost in half. The remaining portion of B-15, which is about the size of Delaware (roughly 160 km long), remains trapped by Ross Island. A large phytoplankton bloom (greenish swirls in the dark water) can be seen in the ocean toward the top of the scene.

This image was acquired by the Moderate-resolution Imaging Spectroradiometer (MODIS), flying aboard NASA’s Terra satellite, on January 4, 2002. Click to view a time-series animation of the scene. Each frame of the movie is a snapshot taken by MODIS almost every day from December 17, 2001, through January 4, 2002.

As the movie plays, notice how a number of large icebergs calve off from the shoreline ice shelf and begin slowly moving eastward. Perhaps this is due to the arrival of summer in the Southern Hemisphere, which brings warmer air and water temperatures to the region. The relatively thinner sea ice is pushed around much more easily by shifting wind and water currents than the thicker, heavier icebergs. Yet, they are all hemmed in by the massive B-15 iceberg, which ultimately blocks them from escaping out to sea. In the last frame of the movie, it appears that a strong wind has pushed the entire ice mass back toward the Scott Coast, where it may re-freeze and become connected again to the Drygalski Ice Tongue.