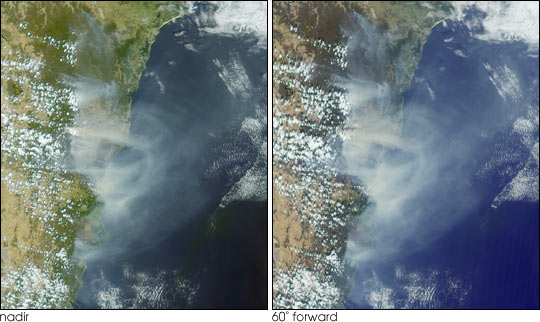 Australia’s largest city of Sydney was clouded with smoke when more than 70 wildfires raged across the state of New South Wales. These images were captured on the morning of December 30, 2001, by the Multi-angle Imaging SpectroRadiometer (MISR) instrument aboard NASA’s Terra spacecraft. The left-hand image is from the instrument’s 26-degree forward-viewing camera, and the right-hand image is from the 60-degree forward-viewing camera. The vast extent of smoke from numerous fires is visible, particularly in the more oblique view. Sydney is located just above image center.

Dubbed the “black Christmas” fires, the blazes destroyed more than 150 homes and blackened over 5000 square kilometers (about 1.24 million acres) of farmland and wilderness between December 23, 2001 and January 3, 2002. Many of the fires are believed to have been caused by arsonists, with only one fire linked to natural causes. The fires were aggravated by gusty winds and hot dry weather conditions. Approximately 20,000 people have worked to contain the blazes. No people have lost their lives or been seriously injured. Nevertheless, the fires are considered to be the most prolonged and destructive of any in Australia since the Ash Wednesday conflagration of 1983 that claimed 72 lives.

High-Resolution View of Fires and Smoke near Sydney, Australia