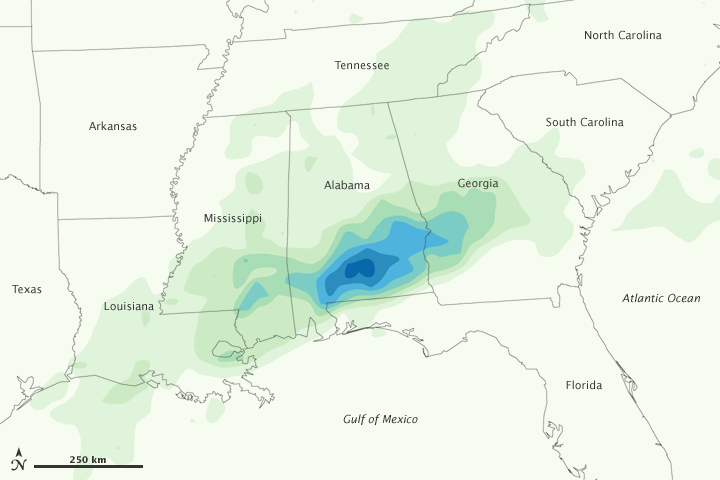 Torrential rains dumped more than a foot of water on parts of southern Alabama while heavy rains caused flash floods and set a new record in New Orleans in mid-December 2009. This color-coded image shows rainfall amounts for the southeastern United States from December 9–15, 2009. Lightest rainfall amounts appear in pale green, and heaviest rainfall amounts (more than 600 milliimeters) appear in deep blue. Although rain is heaviest in south-central Alabama, rainfall extends northward over Tennessee, eastward over Georgia and South Carolina, and westward over Louisiana.

Flash floods inundated downtown Brewton, Alabama, where more than 12 inches (30 centimeters) of rain fell in just a few hours. A day later, businesses and schools were closed during the cleanup effort, Al.com reported.

Although rainfall amounts in this image appear lighter in Louisiana, the New Orleans metropolitan area experienced record-setting rainfall between December 1–15, according to news reports. The Times-Picayune reported that average rainfall for the month of December is 5.07 inches (12.9 centimeters) and the previous record for December was 10.77 inches (27.4 centimeters) set in 1967. On December 15, 2009, total rainfall measured at Louis Armstrong International Airport was 22.54 inches (57.25 centimeters).