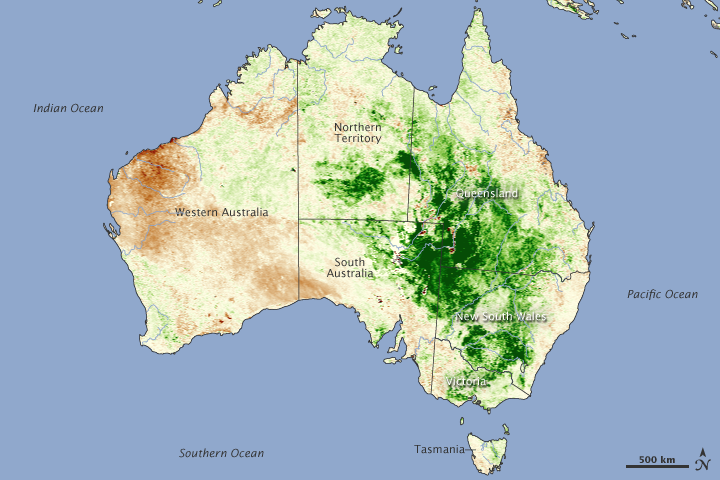 For central Australia, the late summer and early fall of 2010 was eventful, starting with rain, and leading to floods, plants, and finally insects. Between the end of February and early March, unusually heavy rain fell across Australia’s dry interior. Parts of central Australia received more rain in 11 days than they usually do in a year, and some places recorded rainfall totals more than double the total rainfall for all of 2009, said the Australian Bureau of Meteorology.

The extreme rain brought floods, but it also turned the desert green, as shown in this vegetation index image. The image was made with measurements from the Advanced Very High Resolution Radiometer on the NOAA-18 POES satellite acquired throughout March 2010. Areas where plant growth was higher than the 2006–2009 average are green. Places where plants grew less than average are brown.

The areas where locusts had been observed in March (see Distribution of Australian plague locusts: 1 March to 31 March 2010) are the same areas that also experienced unusually high plant growth. With ample habitat, the insects thrived. The commission anticipated that swarms of locusts would develop throughout April. The swarming locusts consume crops. The locusts had already destroyed thousands of hectares of crops and pasture as of April 14, reported AFP.

In November 2008, the Australian Plague Locust Commission reported that a few small swarms of locusts had started to develop in New South Wales.