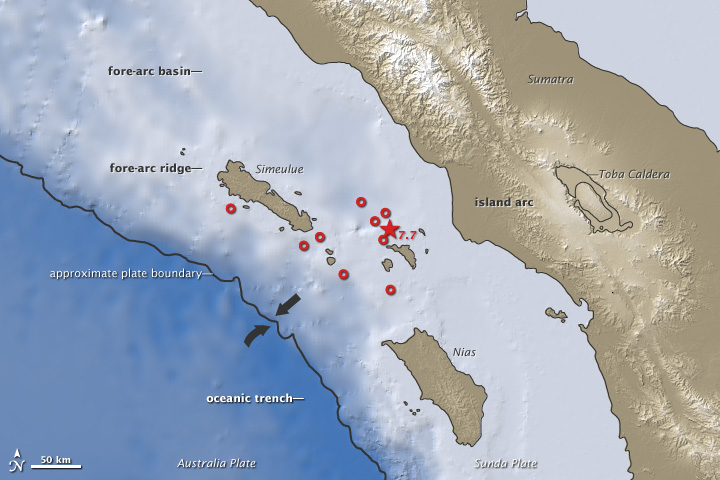 A magnitude 7.7 earthquake struck deep beneath the Selat Mentawai (Mentawai Straight), between Sumatra and the nearby Simeulue and Nias Islands on April 6, 2010. Although it was stronger than any earthquake in the continental United States since the Great San Francisco Earthquake of 1906 (magnitude 7.8), it was modest by Indonesian standards. Two recent great earthquakes—a magnitude 8.6 on March 28, 2005, and a magnitude 9.1 on December 26, 2004—occurred within 125 kilometers of the recent quake. The structure of the region’s sea floor and the topography of the islands give clues about the source of the geological violence: Sumatra is part of an island arc along the boundary where the Australia and Sunda tectonic plates collide.

This map shows the location of the magnitude 7.7 earthquake (red star) and the series of weaker aftershocks that occurred over the next several days (red circles). The aftershocks ranged up to magnitude 5.1. The depth of the ocean is shown in blue, with darker colors representing deeper water. Elevation is shown in shades of brown; lighter areas are higher. The boundary between the Australia Plate and the Sunda Plate is a thick black line. Arrows represent the relative direction of motion of the two plates, which are colliding at a rate of about 60 millimeters (2 inches) per year. Most of the time, friction between the plates causes them to stick together, and stress increases over time. When enough stress builds to fracture the stuck rocks, the plates jump past each other, releasing energy in the form of earthquakes.

The map reveals typical features of a subduction zone: an oceanic trench, a fore-arc ridge, a fore-arc basin, and an island arc. The location of the plate boundary is marked by the Sunda Trench, a narrow band of very deep water that parallels the Sumatran coast. Along the trench (lower left), the Australia plate is moving underneath (represented by a curved arrow) the Sunda Plate, forming a deep trough. On the edge of the Sunda Plate, approximately 100 kilometers (60 miles) from the Sunda Trench and 180 kilometers (100 miles) from Sumatra, are a series of islands that are the crest of a fore-arc ridge. The ridge is formed primarily from marine sediments scraped off the top of the Australia plate and piled up on top of the leading edge of the Sunda Plate. These sediments are called an accretionary wedge.

Simeulue and Nias are separated from Sumatra by the Selat Mentawai. This sea is a fore-arc basin, a depression between the fore-arc ridge and island arc. Sediments washed into the basin from both the fore-arc ridge and island arc weigh down the crust in this area, creating the depression. Sumatra itself is part of an island arc. The island is raised above sea level by the upwelling of hot, buoyant magma, derived from partially melted rocks along the boundary between the subducting (Australia) plate and the overriding (Sunda) plate. Active volcanoes and calderas fed by the rising magma parallel Sumatra’s west coast. Among these is Toba Caldera, the site of the largest eruption in the past 2.5 million years.

Active subduction off the Indian Ocean coast of Sumatra is responsible for both the region’s geography and its earthquakes. Although rare on human timescales, over geologic time earthquakes are frequent in the area. The same forces that produce the earthquakes also created Sumatra, its volcanoes, the nearby islands, and shaped the sea floor.

NASA image by Jesse Allen and Robert Simmon, based on data from the General Bathymetric Chart of the Oceans, the Shuttle Radar Topography Mission, the USGS Earthquake Hazard Program, and the Sumatran Plate Boundary Project. Caption by Robert Simmon.

Subduction off the coast of Sumatra is responsible for the region’s geography, undersea topography, earthquakes, and volcanoes.