Ash Plume across the North Atlantic 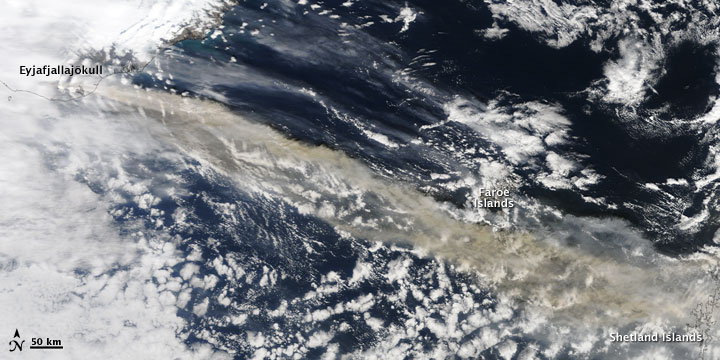 Iceland’s Eyjafjallajökull Volcano sent a plume of ash and steam across the North Atlantic in mid-April 2010, prompting authorities in the United Kingdom, Ireland, France, and Scandinavia to close airspace over their countries. The airspace closure had a ripple effect, disrupting flights to and from other countries as well. Authorities could not say how long the airspace closure would last, and the ash’s spread threatened to force closures of additional airspace over the coming days.

The Moderate Resolution Imaging Spectroradiometer (MODIS) on NASA’s Terra satellite captured this natural-color image on April 15, 2010. A volcanic plume blows from Eyjafjallajökull Volcano in southern Iceland toward the east-southeast. The plume blows past the Faroe Islands and arcs slightly toward the north near the Shetland Islands. The plume’s tan hue indicates a fairly high ash content.

Unlike the soft, fluffy material that results from burned vegetation, volcanic ash consists of tiny jagged particles of rock. Once sucked into an airplane’s turbines, the abrasive material can easily cause engine failure, but an aircraft’s weather radar can’t spot the ash.

Eyjafjallajökull (or Eyjafjöll) is a stratovolcano composed of alternating layers of ash, lava, and rocks ejected by earlier eruptions. This volcano rises to a height of 1,666 meters (5,466 feet) above sea level. It began erupting for the first time in 190 years on March 20, 2010. The eruption opened a 500-meter (2,000-foot) fissure, and also produced lava fountains that built several hills of bubble-filled lava rocks (scoria) along the vent.

Acquired April 15, 2010, this natural-color image shows an ash plume blowing from Eyjafjallajökull Volcano toward the east-southeast across the North Atlantic. The plume’s tan hue indicates a fairly high ash content.