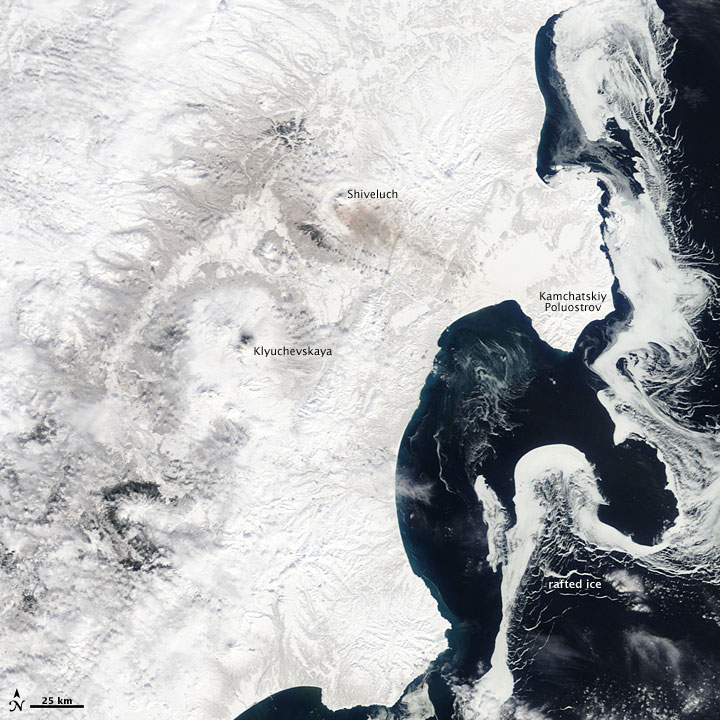 The resemblance between the sea ice and the coastline is most conspicuous around Kamchatskiy Poluostrov—a peninsula that extends eastward from the coast, curling toward the south like a knobby claw. Ice fills the bay inside this peninsula, and the land and ice combined span roughly 85 kilometers (53 miles) north to south.

South of this peninsula floats a formation of sea ice. A lobe of especially thick ice in this formation mimics the inlet southwest of Kamchatskiy Poluostrov. Much of the ice in this lobe is likely composed of layers of relatively thin ice that have rafted, or stacked, into thick layers. Adjacent to this northward-projecting lobe, the sea ice retreats to the south, imitating the overall shape of the peninsula. Immediately east of the peninsula, sea ice floats close to the coastline. North of the peninsula, another formation of sea ice traces the shape of the coast, separated from shore by open water.

The similarity between the eastern margin of the land and the western margin of the sea ice suggests that the ice formed along the shore and was later pushed away and slightly deformed by winds. Downslope winds can be powerful along shorelines, and many of the volcanic peaks on the Kamchatka Peninsula, including Shiveluch and Klyuchevskaya, provide high points from which such winds can descend.

Besides being steady and strong, downslope winds can also be cold, and the frigid wind over the ocean surface has helped form fresh sea ice in areas where older ice was blown out to sea. Newly forming ice is most obvious southwest of Kamchatskiy Poluostrov and east of Klyuchevskaya Volcano.