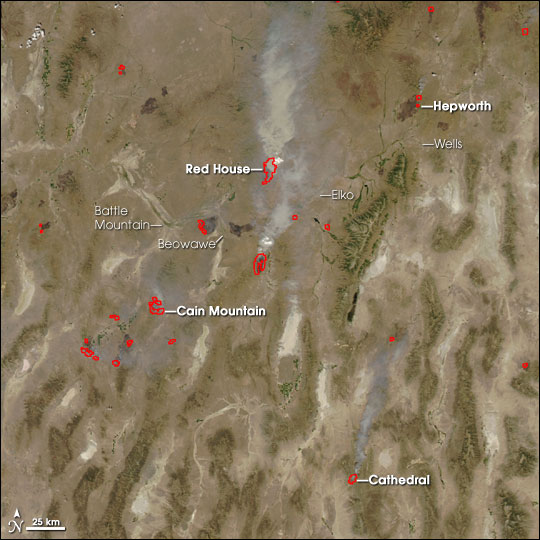 Fire activity ramped up across the U.S. West near the end of the third week of July 2007. Dry thunderstorms (lightning and winds, but no rain) ignited hundreds of fires in a matter of days, and many of these became large blazes that raced through dry grass, sagebrush, and forests.

This image of Nevada was captured by the Moderate Resolution Imaging Spectroradiometer (MODIS) on NASA’s Aqua satellite on July 18. Places where MODIS detected actively burning fire are outlined in red. Dark brown burn scars dot the buff-colored landscape, while thick smoke stretches north from the fires. Many of the fires are burning along the Interstate 80 corridor; the highway is dotted with small towns that fall along its path: Wells, Elko, Beowawe, Battle Mountain.

Some of the more substantial fires in this image include (from north to south) Hepworth, Red House, Cain Mountain, and Cathedral. Hepworth and Red House are fire complexes: a group of adjacent fires grouped together for firefighting purposes. According to the National Interagency Fire Center’s situation report as of 5:30 a.m. MDT on Thursday, July 19, 2007, Hepworth had burned 39,799 acres, Red House had burned 24,000 acres, Cain Mountain had burned 15,000 acres, and Cathedral had burned 5,000 acres. Red House threatened structures in the area, while Cathedral showed extreme behavior of rapid, wind-driven spread. The Cathedral fire had also jumped to the canopy, enabling the fire to leap from treetop to treetop, independent of ground movement.

The large image provided above has a spatial resolution (level of detail) of 250 meters per pixel. The MODIS Rapid Response Team provides twice-daily images of the region in additional resolutions and formats, including an infrared-enhanced version that makes burned landscapes stand out in brick red.