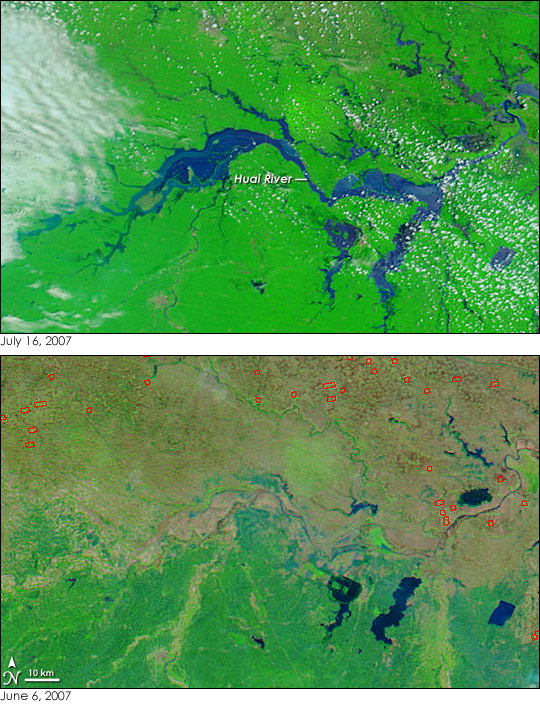 A fresh round of flooding swamped the Huai River in central China when torrential rain began again on Friday, July 13, 2007, reported the Chinese Xinhua News Agency. The floods, the worst since 1954, forced nearly half a million people from their homes, said Xinhua.

More rain was forecast, but the region got a brief respite on July 16, when the Moderate Resolution Imaging Spectroradiometer (MODIS) on NASA’s Terra satellite captured the top image. The nearly cloud-free skies provided a clear view of the flooded Huai River. The image, along with the lower, pre-flood image, was made with a combination of infrared and visible light to increase the contrast between muddy flood water and tan earth. Water is dark blue or black, though sediment in the water can give it a lighter color. In the top image, reflected sunlight also lightens the color of the water. Clouds are white and pale blue, plant-covered land is green, bare earth is tan, and recently burned ground is red-brown. Fires are outlined in red.

In early June, before the intense summer rains started, the river was barely visible as the lower image shows. But by July 16, the river spread kilometers over its bank. Some of this flooding is deliberate. Chinese officials diverted water to the Huai River basin to alleviate the threat of flooding in more populated areas, said Xinhua.