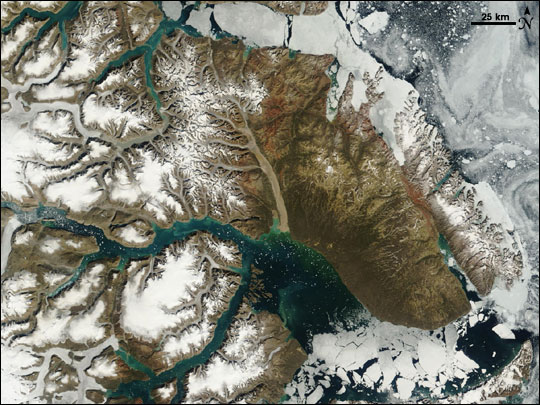 Summer thaw was underway on the fringe of eastern Greenland when the Moderate Resolution Imaging Spectroradiometer (MODIS) on NASA’s Terra satellite passed overhead and captured this image on July 13, 2007. Inland (left), snow and ice make a white blanket, while closer to sea (center and right) the annual snow has retreated from much of the rocky coastline and from the surface of some glaciers, which appear slightly gray. In the fjords, meltwater carrying finely ground sediment, crushed by the movement of glaciers over rock, colors the water turquoise. Sea ice (lower right) has fractured into geometric blocks, and small chunks of ice are scattered in some fjords like confetti. At far right, ice has disintegrated or been crushed into such small pieces that it looks like froth or foam swirling in the waters of the Greenland Sea.

This image is centered on a section of Greenland’s eastern coast called Scoresby Land. Located about mid-way along the island’s eastern coastline, the area is defined to the south by a large sound known as the Kangertittivaq, or Scoresby Sound. The sound takes up the bottom right part of the scene. The sound is just north of 70 degrees north latitude, and while the land around it appears barren and rocky, a careful look at the north bank reveals an olive-colored tint to the brown landscape. This dull olive-brown area is actually vegetated. The grasses and low-growing tundra plants that survive there allow the area to support wildlife, including populations of mammals such as musk ox, Arctic foxes and hares, and lemmings, as well as land birds such as snow buntings, snowy owls, and Gyr falcons.