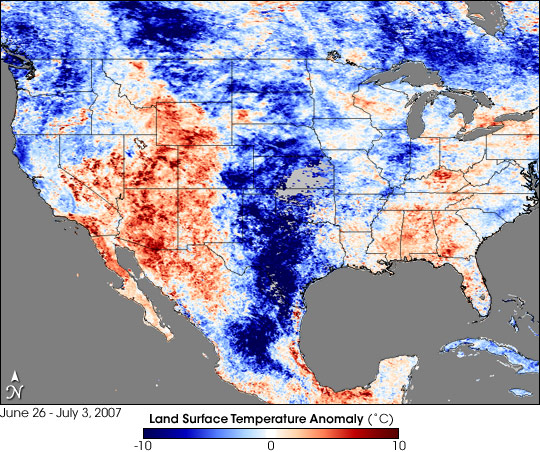 Extreme heat lingered over much of the western United States in early July 2007. Temperatures soared to triple digits, meeting or breaking records from Las Vegas, Nevada, to Great Falls, Montana, said news reports. The oppressive heat contributed to creating prime fire conditions, so that, when dry thunderstorms (lightning storms accompanied by little or no rain) rolled through on July 7, lightning sparked dozens of fast-moving wildfires.

This image, created from data collected by the Moderate Resolution Imaging Spectroradiometer (MODIS) on NASA’s Terra satellite from June 26 though July 3, 2007, shows land surface temperatures compared to average temperatures observed during the same period in 2000, 2001, and 2002. Deep red across the Southwest and the Intermountain West indicate that temperatures were much higher than they were in 2000-2002. The Southeast also experienced warmer temperatures. Northern California, Oregon, and Washington appear to be cooler than in previous years, as indicated by the blue tones. The heat wave started mid-way through the week-long period shown in this image. While temperatures may have soared at the end of the period, cooler temperatures earlier in the week dominate the signal. Land surface temperatures from July 4-11 show that these areas warmed significantly the following week.

The Southern Plains are dark blue where temperatures were much cooler than they had been in previous years. During this period, torrential rains drenched the region, causing wide-spread flooding in Texas and Oklahoma and in Kansas and Missouri. The gray region over Kansas and Oklahoma is an area in which MODIS could not record the land’s temperature because of perpetual cloud cover during the week-long period.