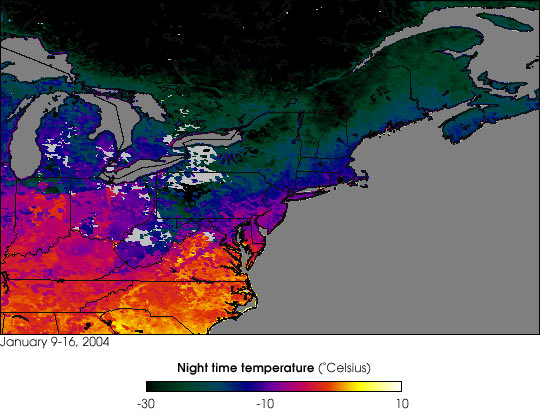 In the second week of January 2004, winter blew an icy breath across the northeastern United States, keeping temperatures well below freezing for days in a row. Wind chill warnings for temperatures as low as 45 degrees Fahrenheit below zero (-42.8 Celsius) were posted in multiple states. Public officials urged people to conserve energy to avoid causing blackouts on the power grid while it worked to keep up with energy demand.

Temperatures patterns are visible in terms of both latitude and altitude. The general trend of warmer temperatures at lower latitudes is interrupted by outcroppings of colder temperatures in more mountainous terrain. For example, temperatures across most of Canada, the Great Lakes region, and the Northeast stayed below -10 degrees Celsius (14 degrees Fahrenheit) during the period, but those frigid temperatures dipped southward into mountainous West Virginia (southwest of image center) as well. And while most of the Mid-Atlantic and southern states hovered right around 0 degrees Celsius (32 degrees Fahrenheit) the peaks of the southern Appalachian Mountains at the border of North Carolina and Tennessee are tipped with the purple of colder temperatures.