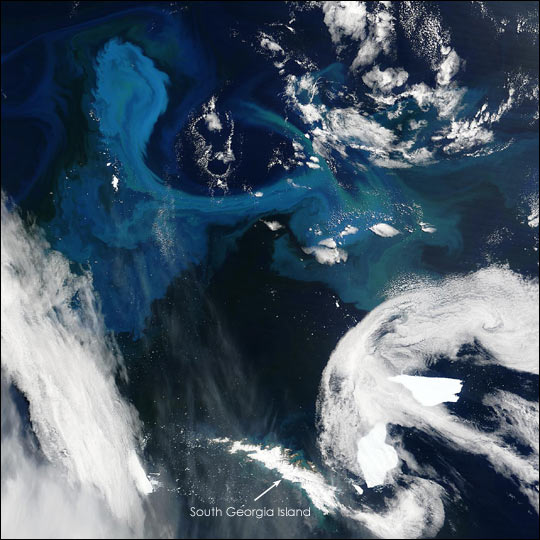 The white, snow-covered outline of South Georgia Island is dwarfed by several large icebergs in this Moderate Resolution Imaging Spectroradiometer (MODIS) image. The icebergs drifted north from Antarctica, which is about 1,000 miles (1,610 km) south of the island. Several smaller icebergs also salt the South Atlantic Ocean around the island.

To the north, expansive swirls of blue and green mark out the location of a large phytoplankton bloom. These microscopic plants thrive in the cold, nutrient-rich water near the southern tip of South America, which is located 1,340 miles (2,157 km) west of South Georgia Island. The chlorophyll-producing plants color the ocean blue and green in satellite imagery. The Terra satellite acquired this image on January 16, 2004.

The high-resolution image provided above is at MODIS' maximum resolution of 250 meters per pixel. The image is available in additional resolutions.