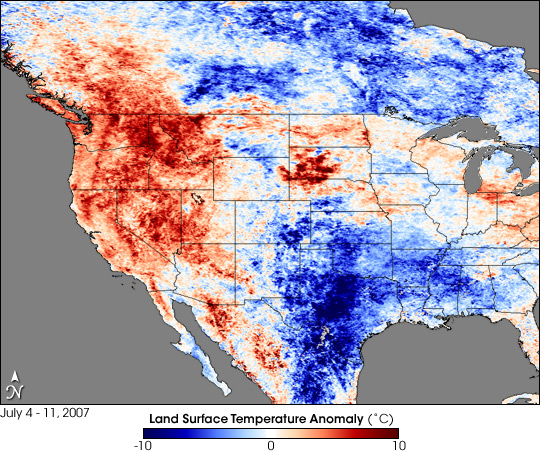 The oppressive heat that crept over parts of the western United States during the first few days of July 2007 took hold of the entire West during the week of July 4 through July 11. Deep red tones blanket every western state in this land surface temperature image, an indication that temperatures were warmer than in previous years. The image was made with data collected by the Moderate Resolution Imaging Spectroradiometer (MODIS) on NASA’s Terra satellite and shows temperatures recorded between July 4 and July 11, 2007, compared to the average of temperatures observed during the same period in 2000, 2001, and 2002. Areas that are warmer than during that three-year period are red, while cooler areas are blue.

Triple-digit temperatures broke or matched records from Las Vegas, Nevada, to Great Falls, Montana, during this period. In this image, a cluster of red-black over eastern Washington, northern Idaho, and eastern Montana indicates that these regions experienced much warmer temperatures than in previous years. Western South Dakota (the Black Hills region) was also exceptionally warm. On the other end of the scale, Texas was much cooler than it had been in 2000, 2001, and 2002. Heavy rains pounded Texas on and off throughout this period, contributing to wide-spread flooding.

You can download a global KMZ file of Land Surface Temperature anomaly suitable for use with Google Earth.