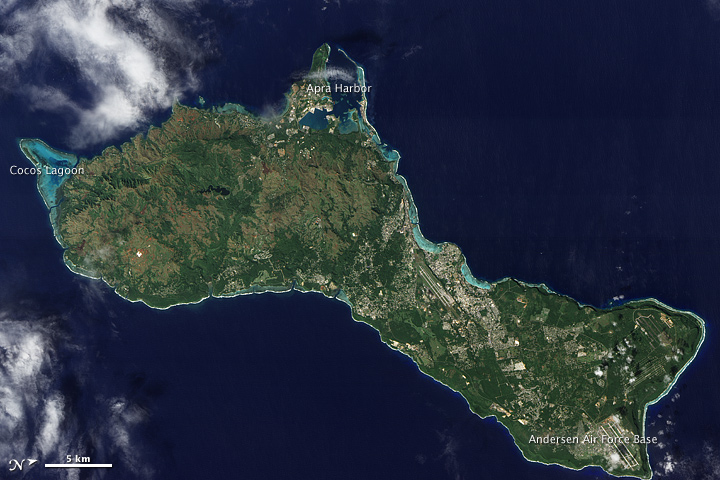 On December 30, 2011, cloud-free skies presented NASA’s Earth Observing-1 (EO-1) satellite with this unobstructed view of the island of Guam. Note that this image, taken by the satellite’s Advanced Land Imager (ALI), has been rotated and north is at right.

Located in the tropical Pacific Ocean, the U.S. territory of Guam lies at the southern end of the Mariana Island Chain. As the largest island in that archipelago, Guam stretches roughly 30 miles (50 kilometers) from northeast to southwest. Fields, forests, military bases, and settlements all mix on the landscape. Two prominent airstrips run northeast-southwest, one at the northeastern tip of the island, and the other in central Guam.

Coral reefs fringe the island, and they are especially visible around Apra Harbor and Cocos Lagoon. Shallow water along these reefs glows peacock blue.

Not far from Guam, the ocean is anything but shallow. Just east of the Mariana Islands lies the Mariana Trench. Located at the boundary between tectonic plates, it is the deepest point in the Earth’s ocean.

Fields, forests, military bases, and settlements all mix on this U.S. territory in the tropical Pacific, and coral reefs fringe the island. 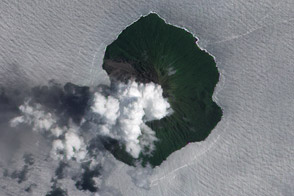