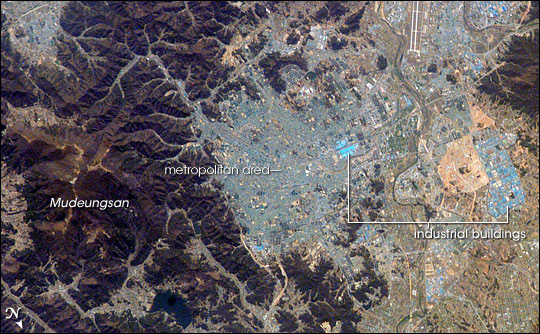 The most notable feature in this astronaut photograph is an interesting blue cast to the urbanized regions. Digital astronaut photographs capture the same red, green, and blue wavelengths of reflected light that human eyes are sensitive to (known as a “true-color” image), and urban areas typically appear in tones of grey in such images. The distinctive blue-grey color of the Kwangju metropolitan area is the result of numerous blue rooftops, present on both small residential buildings (not visible at the image resolution) and large industrial buildings such as those located at image center and image right. High-resolution imagery of the rooftops (not shown) suggests that the blue color is the result of painting rather than an intrinsic characteristic of the building material.

Gwangju is perhaps best known to the West as the location of the Gwangju Massacre of May 1980, in which civilian demonstrators were killed by government forces during a period of military rule in South Korea. The event is commonly described as the driving force behind the country’s democratic reforms, and it has led to identification of the city within South Korea as “the shrine of Korean democracy.”

Astronaut photograph ISS014-E-15258 was acquired February 26, 2007, with a Kodak 760C digital camera using an 180 mm lens, and is provided by the ISS Crew Earth Observations experiment and the Image Science & Analysis Laboratory, Johnson Space Center. The image in this article has been cropped and enhanced to improve contrast. The International Space Station Program supports the laboratory to help astronauts take pictures of Earth that will be of the greatest value to scientists and the public, and to make those images freely available on the Internet. Additional images taken by astronauts and cosmonauts can be viewed at the NASA/JSC Gateway to Astronaut Photography of Earth.