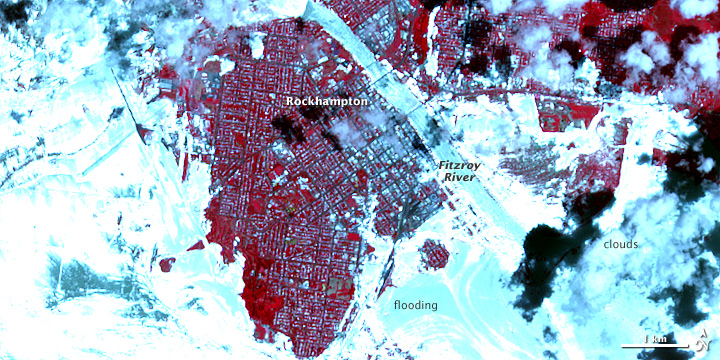 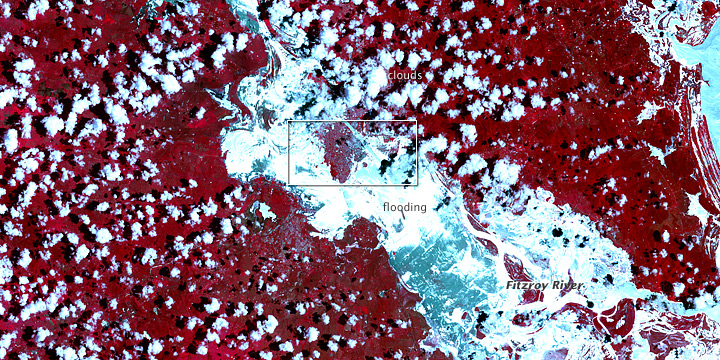 Floodwaters isolated the Australian city of Rockhampton, Queensland, in early January 2011, as the mayor warned that cleanup could take a year, according to The Sydney Morning Herald. The Fitzroy River, which had been predicted to peak at 9.4 meters (30.8 feet), instead reached 9.2 meters (30.1 feet). The slightly lower level spared perhaps 200 homes, the mayor said.

The Advanced Spaceborne Thermal Emission and Reflection Radiometer (ASTER) on NASA’s Terra satellite captured this false-color image of the area on January 5, 2011. The top scene is a close-up, and the bottom shows a wider area. Vegetation is red. Clouds are light blue and cast shadows onto the land surface below. Buildings appear as isolated patches of gray-blue within the grid pattern of the city streets. Water, including floodwater, ranges in color from medium blue to light blue.

The Fitzroy River has spilled over its banks both north and south of the city, and encroaches onto the city grid in the south. In the close-up, flooding occurs on both the east and west banks but appears more severe west of the river. The wide-area view shows extensive flooding south of Rockhampton and along its western margin.

New Thunderstorms were forecasted for the Rockhampton area, but were not expected to affect existing flood levels, The Sydney Morning Herald reported.

In June 2008, intense spring rains pushed the Iowa River over its banks in Iowa City. Though the flood had started to recede when the Advanced Spaceborne Thermal Emission and Reflection Radiometer (ASTER) on NASA’s Terra satellite captured the top image on June 22, the river was still swollen.