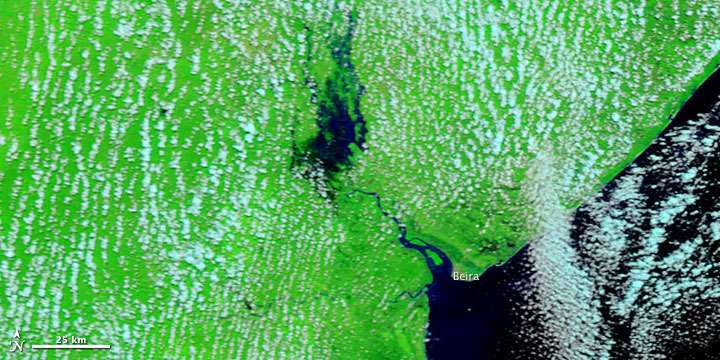 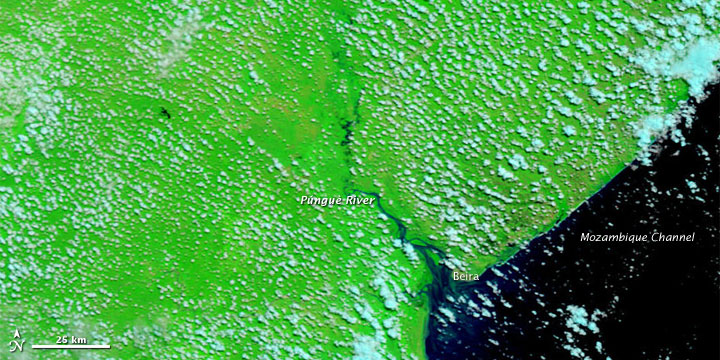 Flooding had claimed at least two lives in Mozambique’s Sofala Province by March 8, 2010, according to the Dartmouth Flood Observatory. The Púnguè River, which flows through wetlands before emptying into the Mozambique Channel near the city of Beira, roared 2.3 meters (7.5 feet) above its flood alert level at one location. Overflowing its banks, the river flooded parts of the Beira-Zimbabwe Highway, creating kilometers-long traffic jams.

The Moderate Resolution Imaging Spectroradiometer (MODIS) on NASA’s Terra satellite captured these images of part of Sofala Province, around the city of Beira. Both images use a combination of infrared and visible light to increase the contrast between water and land. Vegetation appears bright green. Clouds appear sky blue. Water appears navy blue.

MODIS acquired the top image on March 8, 2010, and the bottom image a year earlier, on March 12, 2009. In the image from 2010, waters overflowing the banks of the Púnguè River create a big blue splotch northwest of Beira, and the river near the coast is swollen. In the image from 2009, the same area is largely dry ground.