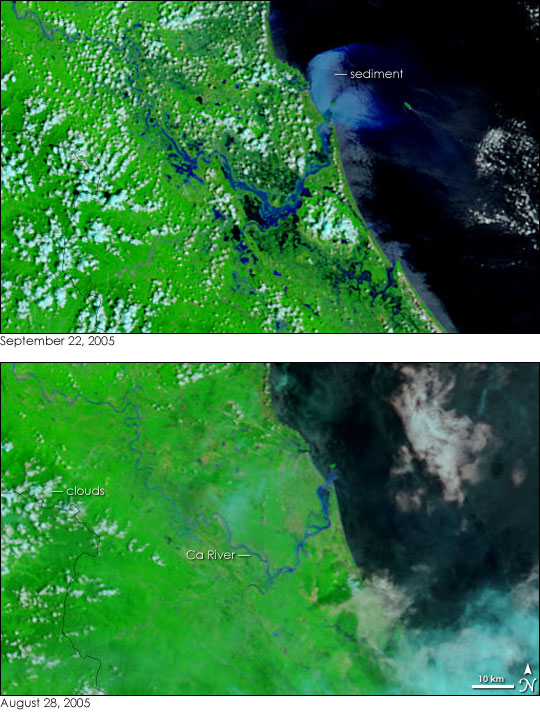 Tropical Storm Vincente pounded northern Vietnam on September 18 and 19, 2005, dumping heavy rain along the coast and over the inland mountains. The deluge left the Ca River in the Nghe An Province grossly swollen. The top image, taken by the Moderate Resolution Imaging Spectroradiometer (MODIS) on NASA’s Terra satellite on September 22, 2005, shows widespread flooding along the coast. The lower image, provided for comparison, was taken by Terra MODIS on August 28, 2005. In both images, water is dark blue or black, clouds are light blue and white, and vegetation is green.

On September 22, black pools of water dot the land on either side of the Ca River where dry ground existed on August 28. The river itself flows over its banks, forming a wide strip of blue where a thin river meandered a month earlier. Another sign of severe flooding is the thick plume of sediment that pours into the Gulf of Tonkin from the river’s mouth. The sediment could be coming from several different places: the swollen river could be eating away at the land along its banks; mountain mudslides could be filling the river with soil; or muddy run-off from the surrounding land could be draining into the river.

The large images provided above have a resolution of 250 meters per pixel. The MODIS Rapid Response Team provides daily images of the region in additional resolutions.