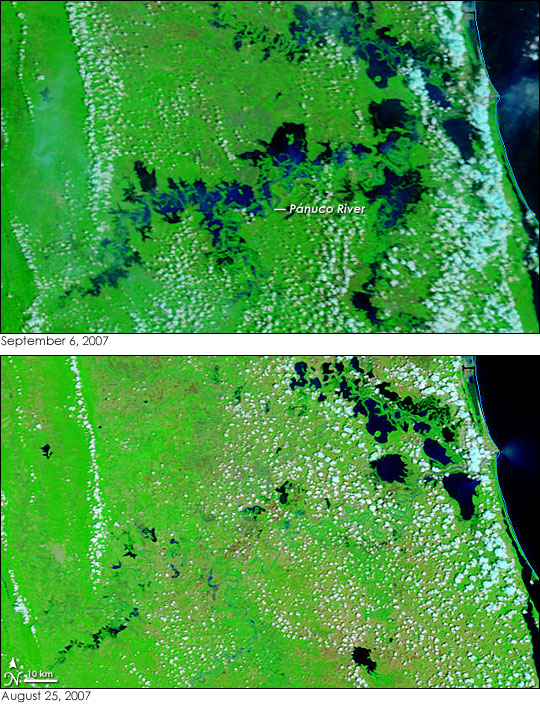 Inundated with rainfall from two major hurricanes in a little more than two weeks, the Pánuco River of central Mexico was flooded on September 6, 2007, when the Moderate Resolution Imaging Spectroradiometer (MODIS) on NASA’s Terra satellite captured the top image. The river meanders through Mexico’s San Luis Potosi and Veracruz States before emptying into the Gulf of Mexico at the Gulf of Tampico, where Hurricane Dean came ashore on August 21. Dean was followed by Felix, which didn’t make direct landfall in central Mexico, but moved north over the region after coming ashore in northern Nicaragua on September 4. This pair of images shows the impact of the two storms on the river.

Terra MODIS captured the lower image a few days after Hurricane Dean passed over. Both images were made with infrared and visible light so that water is black, tainted blue with mud. Clouds are light blue and white, and plant-covered land is vibrant green. After Dean, the upper reaches of the river showed signs of flooding. Dark pools of water dot the river in the lower left corner of the image where no water had been present in an image taken on August 13, a little more than a week before Dean came ashore.

The flooding present on August 25 was small compared to what would come two weeks later. By September 6, the entire river valley was overflowing with water. New pools of water, some several kilometers across, line the river’s banks. The river is also swollen compared to August 25 and August 13. Additional flooding is visible in the wetlands north of the river. Covered by clouds in both images, the city of Tampico sits at the mouth of the Pánuco River.

These images are shown at MODIS’ maximum resolution (level of detail). The MODIS Rapid Response System provides daily images of central Mexico in a variety of resolutions and in photo-like true color.

The passage of two major hurricanes pushed rivers in Central and South Mexico, Guatemala, and Nicaragua well over their banks in early September 2007.