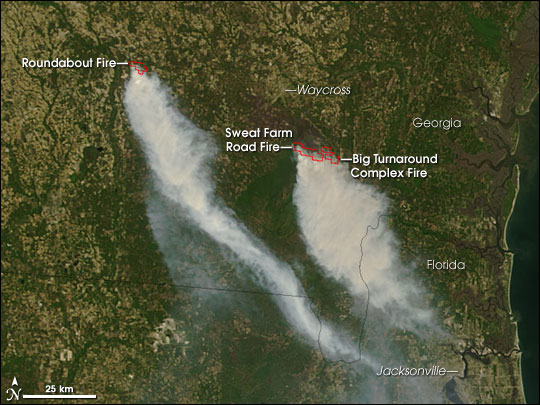 Several large fires were burning in southern Georgia on April 29, 2007, when the Moderate Resolution Imaging Spectroradiometer (MODIS) on NASA’s Terra satellite passed overhead and captured this image. Places where MODIS detected actively burning fires are outlined in red. The Roundabout Fire sprang up on April 27, according to the U.S. Southern Area Coordination Center, and was about 3,500 acres as of April 30. That fire was threatening homes in the community of Kirkland.

Meanwhile, south of Waycross, two large blazes were burning next to each other in the northern part of Okefenokee Swamp. The Sweat Farm Road Fire (previous images) threatened the town of Waycross in previous weeks, but at the end of April, activity had moved to the southeastern perimeter. The fire had affected more than 50,000 acres of timber (including pine tree plantations) and swamps. Scores of residences scattered throughout the rural area are threatened. The Big Turnaround Complex is burning to the east. The 26,000-acre fire was extremely active over the weekend, with flame lengths more than 60 feet (just over 18 meters) in places. The two blazes appeared to overlap in fire perimeter maps available from the U.S. Geospatial Multi-Agency Coordination Team.

According to the Southern Area Coordination Center morning report on April 30, the Sweat Farm Road Fire “will be a long term fire. Containment and control will depend on significant rainfall, due to the inaccessible swamp terrain.” No expected containment date was available for the Big Turnaround Complex Fire, either. Describing that fire, the report stated, “Heavy fuel loading, high fire danger, and difficulty of access continue to hamper suppression efforts.”

The large image provided above has a spatial resolution (level of detail) of 250 meters per pixel. The MODIS Rapid Response Team provides twice-daily images of the region in additional resolutions. They also provide a version of the image that shows smoke plumes stretching out across the Atlantic Ocean.