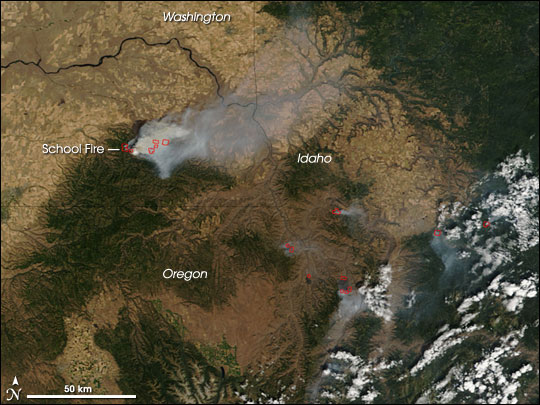 In southeastern Washington in early August 2005, the School Fire was raging through the Umatilla National Forest about 16 miles south of the town of Pomery. By August 11, 2005, the fire had consumed 42,000 acres, and was 40% contained. In addition, the fire destroyed 87 buildings, including 49 residences. Other buildings in the area are under evacuation orders, and several roads are closed.

On August 10, 2005, the School Fire was still billowing thick smoke. When the Moderate Resolution Imaging Spectroradiometer (MODIS) on NASA’s Terra satellite captured this image, the sensor detected several areas of active fire (outlined in red). Additional fires were burning in Oregon and Idaho, though none were as large as the School Fire. Information on the status of fires across the United States, visit the Current Wildland Fire Information Website of the National Interagency Fire Center.

In southeastern Washington in early August 2005, the School Fire was raging through the Umatilla National Forest about 16 miles south of the town of Pomery.