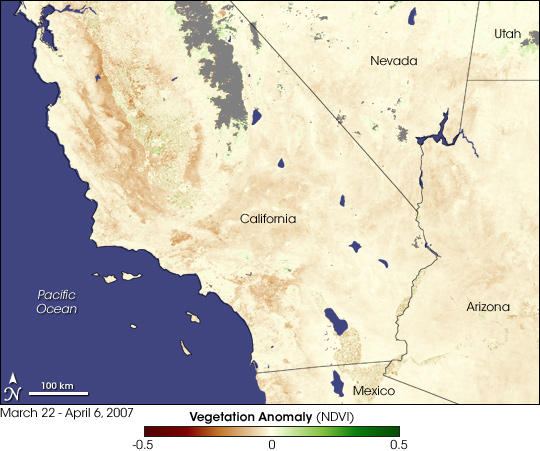 The southwestern United States pined for water in late March and early April 2007. This image is based on data collected by the Moderate Resolution Imaging Spectroradiometer (MODIS) on NASA’s Terra satellite from March 22 through April 6, 2007, and it shows the Normalized Difference Vegetation Index, or NDVI, for the period. In this NDVI color scale, green indicates areas of healthier-than-usual vegetation, and only small patches of green appear in this image, near the California-Nevada border and in Utah. Larger areas of below-normal vegetation are more common, especially throughout California. Pale yellow indicates areas with generally average vegetation. Gray areas appear where no data were available, likely due to persistent clouds or snow cover.

According to the April 10, 2007, update from the U.S. Drought Monitor, most of the southwestern United Sates, including Utah, Nevada, California, and Arizona, experienced moderate to extreme drought. The hardest hit areas were southeastern California and southwestern Arizona. Writing for the Drought Monitor, David Miskus of the Joint Agricultural Weather Facility reported that March 2007 had been unusually dry for the southwestern United States. While California’s and Utah’s reservoir storage was only slightly below normal, reservoir storage was well below normal for New Mexico and Arizona.

In early April, an international research team published an online paper in Science noting that droughts could become more common for the southwestern United States and northern Mexico, as these areas were already showing signs of drying. Relying on the same computer models used in the Intergovernmental Panel on Climate Change (IPCC) report released in early 2007, the researchers who published in Science concluded that global warming could make droughts more common, not just in the American Southwest, but also in semiarid regions of southern Europe, Mediterranean northern Africa, and the Middle East.

Much of the southwestern United States experienced moderate to severe drought in 2007.