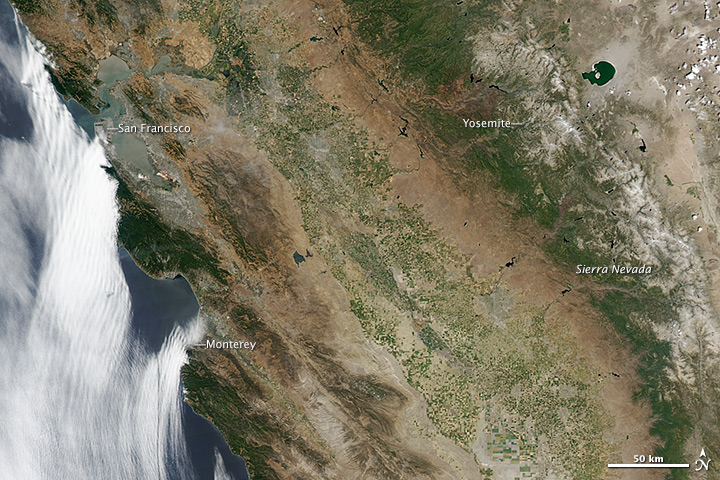 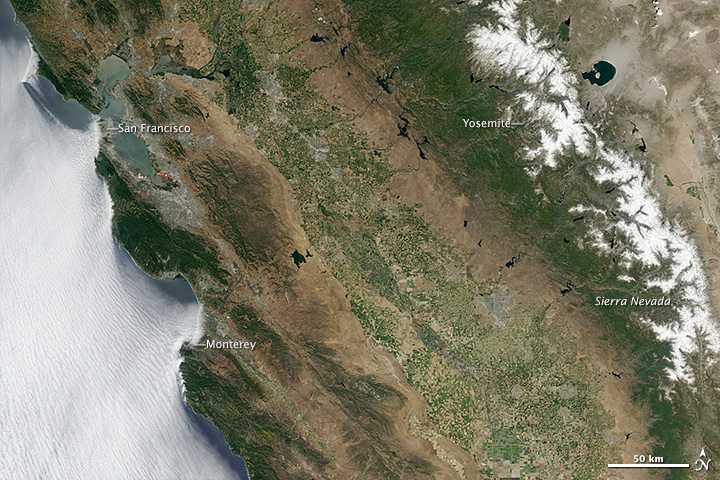 Now in its third year, the drought in California grows worse with each month. 2013 was the driest calendar year in 119 years of records, and 2014 has not brought much relief, even as scientists and residents wait hopefully for El Niño moisture. From stream gauges and reservoir levels to ground-based photos and satellite images, the landscape seems to grow browner and drier with each month.

In a weekly report issued on July 17 by the U.S. Drought Monitor, the entire state of California was classified as being in severe drought. The situation was declared extreme for 79 percent of the state’s land area and exceptional in 36 percent. For more information on drought classification levels, read this.

The pair of images above from the Moderate Resolution Imaging Spectroradiometer (MODIS) on NASA’s Aqua satellite captures a wide view of the situation. The top image was acquired on June 25, 2014; the lower image shows the landscape on July 2, 2011, just as the latest dry period began. Turn on the image comparison tool to see the changes.

Near the Pacific coast, some mountain forests are holding on, but much of area around the Coast Range has browned considerably. The green farmlands visible in the state’s Central Valley in 2011 are much less robust in 2014, with some lands dried out and many fields left fallow for lack of water. Just north of Yosemite National Park, the land is not only brown from drought; it is also scarred from the Rim Fire and other blazes in 2013.

In the Sierra Nevada, the snow cover has decreased significantly, and what remains has a tan or gray tint from dust and soil. On April 1, 2014, California Department of Water Resources noted that snow-water content was just 32 percent of the historical average at a time when snow cover is usually at its yearly peak. By May 1, snow-water content was 18 percent of normal.

This browning of California has been underway for quite some time, with precipitation averaging just 67 percent of normal over the past three years. According to the U.S. Drought Monitor and the National Climatic Data Center, the July 2013 to June 2014 period has been the warmest on record for the state and the third driest since 1895. Precipitation in the current water year (which started October 1, 2013) is just 56 percent of normal, and since May through September are typically dry even in normal years, drought relief is not likely any time soon.

“Eleven of the past fifteen years have been drier than normal, with the past three years delivering about 45 percent of normal rain and snowpack in Southern California,” noted Bill Patzert, a climatologist at NASA’s Jet Propulsion Laboratory. “This follows two of the wettest decades in California’s history—the 1980s and 1990s—when population more than doubled and the economy of the state exploded. So that makes this drought more punishing than those in the past.”

“The Amercian West and Southwest are definitely on the ropes,” Patzert added. “Even with a possible El Niño lurking in the tropical Pacific, there is no quick fix to this drought. It will take years of above-average rainfall to recover, and dramatic restrictions on water usage to maintain California’s economy. The time to tighten our water conservation belts is now.”