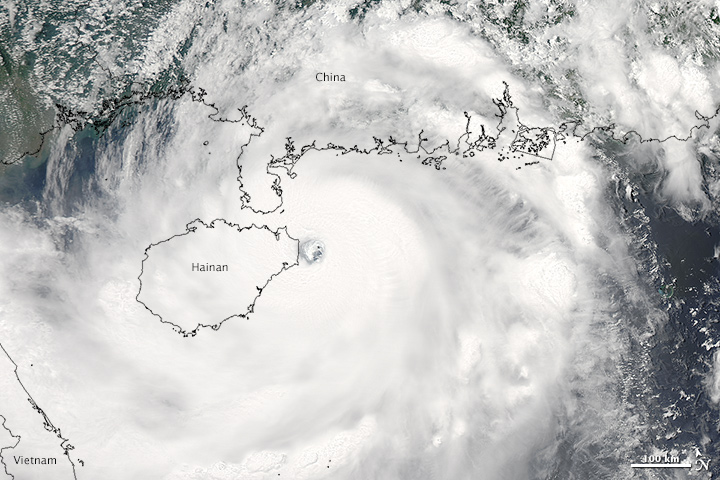 Three days after drenching the central Philippines in flooding rains, Typhoon Rammasun smashed into southeastern China and was still headed for northeastern Vietnam early on July 19, 2014. With a name meaning “thunder of God,” Rammasun approached the coast as a category 4 super typhoon and one of the strongest to hit China’s Hainan Province in 41 years.

The Moderate Resolution Imaging Spectroradiometer (MODIS) on NASA’s Aqua satellite acquired this image of Typhoon Rammasun at 1:35 p.m. local time (0535 UTC) on July 18, 2014. In the image, the storm has a well-defined eye situated just off the coast of northern Hainan; it is surrounded by bands of thunderstorms stretching across the South China Sea and the Gulf of Tonkin.

Shortly before the image was captured, the Joint Typhoon Warning Center reported sustained winds of 125 knots (140 miles or 230 kilometers per hour) and maximum wave heights of 10 meters (35 feet). According to news reports, winds gusted to 160 kilometers (100 miles) per hour in Haikou City, Hainan, a city of 2 million people, and a month’s worth of rain fell in six hours. Chinese meteorologists warned of a storm surge of as much as 6 meters (20 feet). More than one million people were without power in Hainan and Guangdong, and hundreds of thousands of people were evacuated from low-lying areas.

As typically happens when cyclones make landfall, Rammasun broke up a bit and lost strength earlier in the week after passing over the Philippines. But then the storm intensified rapidly over the warm waters of the South China Sea. Such evolution and intensification is a key interest of scientists participating in NASA’s Hurricane and Severe Storm Sentinel (HS3) airborne mission later this summer in the Atlantic Ocean.

After drenching the Philippines, the potent storm re-organized and strengthened before heading for landfall in southeastern China and Vietnam.