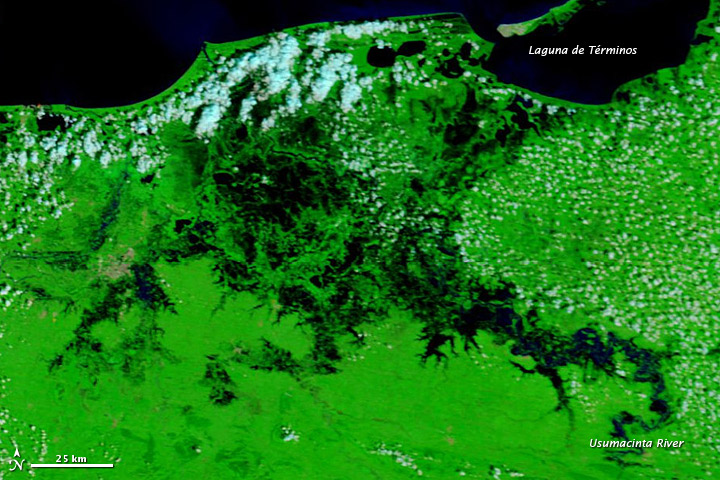 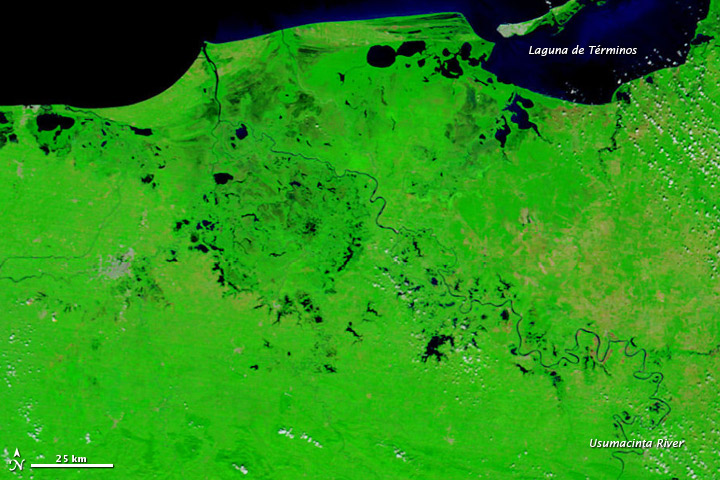 Several rivers in southeastern Mexico spilled over their banks in late October, according to the Latin American Herald Tribune. The Usumacinta River alone damaged homes and croplands in multiple cities, and isolated rural areas by washing out roads. The governor of the state of Tabasco estimated that regional floods had affected 90,000 residents.

The Moderate Resolution Imaging Spectroradiometer (MODIS) on NASA’s Terra satellite captured these images on October 23, 2011 (top), and October 30, 2009 (bottom). Both images use a combination of infrared and visible light to increase contrast between water and land. Water is dark blue, vegetation is bright green, and clouds are pale blue-green.

The Usumacinta River, visible as a thin river in 2009, flows past multiple lakes and ponds en route to the sea. In 2011, many of the water bodies have merged, and water sits on floodplains throughout the region. (This area also experienced severe flooding in 2010.)

The flooding in southeastern Mexico was part of a larger weather phenomenon in the region. On October 19, 2011, the United Nations News Centre reported that heavy rains had caused serious flooding in El Salvador, Costa Rica, Honduras, Guatemala, and Nicaragua, as well as Mexico. The United Nations Office for the Coordination of Humanitarian Affairs (OCHA) reported that floods had affected an estimated 154,000 residents of Guatemala, 38,000 residents of Honduras, and 134,000 residents of Nicaragua. The floods had already claimed dozens of lives, OCHA said. Persistent clouds prevented MODIS from obtaining clear views of some of these areas.

As of October 24, 2011, Tropical Storm Rina had formed off Central America. Projected to strengthen into a hurricane on October 25, the storm held the potential to bring more rain to the region.