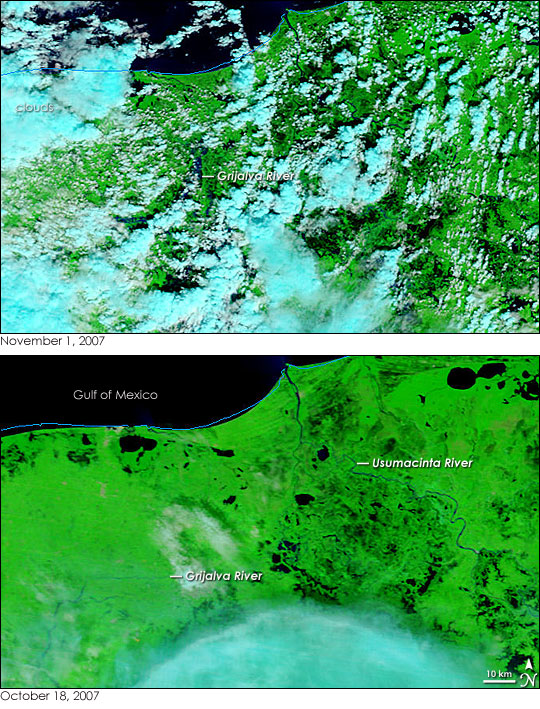 Clouds still veiled the extensive floods that overwhelmed southeastern Mexico’s Tabasco state when the Moderate Resolution Imaging Spectroradiometer (MODIS) on NASA’s Terra satellite captured the top image on November 1, 2007. Small breaks in the clouds reveal glimpses of the sodden ground. Days of heavy rain inundated the low-lying region, leaving some 70 percent of the state under water, reported BBC News on November 2. With more than a million people affected and 300,000 trapped in their homes, Mexico’s president called the flood one of the worst natural disasters in the nation’s history, said BBC.

These images hint at the severity of the floods. Both images were made with a combination of infrared and visible light to increase the contrast between water and earth. Plant-covered land is bright green, while water is black or dark blue. Clouds are pale blue and white. The lower image was taken on October 18, 2007, and shows the region before the rain started. Dark smudges surround the converging Grijalva and Usumacinta Rivers in the lower image. These dark areas are lakes and wetlands. There may be more water in the wetlands in the November 1 image, but it is difficult to differentiate between water and shadows cast by the towering clouds that are scattered over the region. More obvious is the flooding along the Grijalva River. The section of the river that is visible through a break in the clouds is many kilometers wider than it was on October 18. Villahermosa, the flooded capital of Tabasco, is located along this section of the Grijalva River.