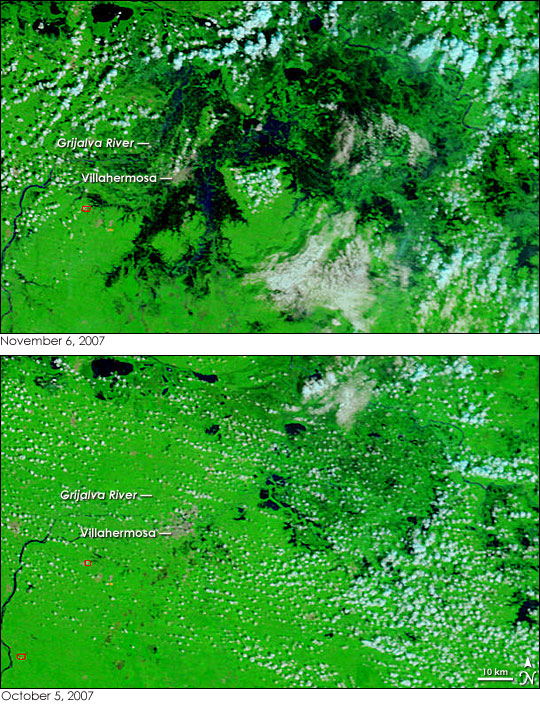 Floods in southern Mexico had started to recede on November 6, 2007, when the Moderate Resolution Imaging Spectroradiometer (MODIS)on NASA’s Terra satellite captured the top image. The lower image, from October 5, 2007, shows Tabasco, Mexico, before the floods started. Tabasco is a low-lying state, and even under normal circumstances, water figures prominently in the landscape. Water, black in this combination of infrared and visible light, dots the bright green, plant-covered land in the pre-flood image.

Water dominates in the flood image. Though clouds, pale blue and white, obscure the view of the ground slightly, this is the clearest view MODIS captured since the floods began on October 28. The wetland area in the center of the image is nearly entirely covered with water. The most impressive flooding, perhaps, is east of the state’s capital, Villahermosa, the cement-gray region left of center. The city is nearly entirely surrounded by water, though the floods are far more severe on the east and south. Water levels on the Grijalva River are lower than they were on November 3, a sign that the floods were abating.

A red square outlines the location of a fire southeast of Villahermosa in both the October 5 and November 6 images. The persistence of the fire suggests that this may be a gas flare burning in one of the region’s many oil refineries.

The floods covered up to 80 percent of the state of Tabasco, affecting more than one million people, said the United Nations Office for the Coordination of Humanitarian Affairs (OCHA). A lack of water, food, and shelter drove many people from their homes in both Tabasco and Chiapas, Tabasco’s southern neighbor. In Tabasco, 37,318 people were registered in emergency evacuation shelters, and 20,400 were in shelters in Chiapas, said OCHA on November 6. The President of Mexico called the floods one of the worst natural disasters in the nation’s history.

Daily images of southeastern Mexico are available from the MODIS Rapid Response System in both false color, as shown here, and photo-like true color.