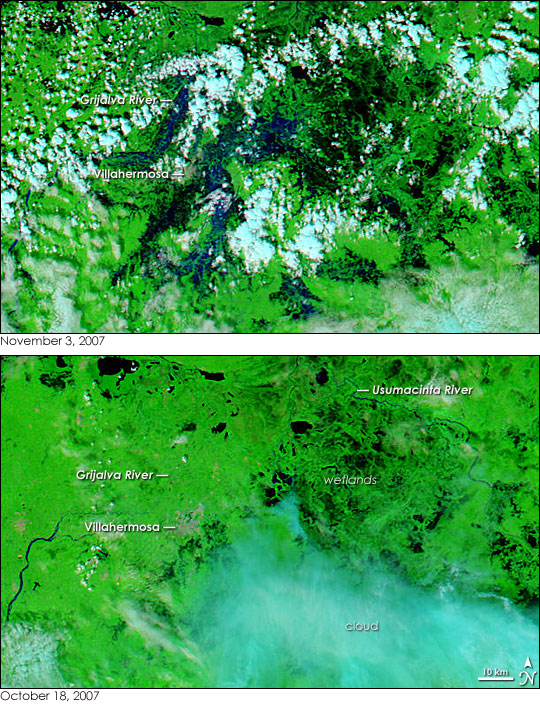 It doesn’t always take a hurricane to cause devastating, widespread floods in coastal regions surrounding the Gulf of Mexico. Starting on October 28 and lasting several days, a low pressure system unleashed steady, heavy rain on southeastern Mexico. The rains pushed rivers over their banks and left about 80 percent of the state of Tabasco under water. The Moderate Resolution Imaging Spectroradiometer (MODIS) on NASA’s Aqua satellite captured the top image of the floods on November 3, 2007. Aqua MODIS took the lower image on October 18, before the rain started. Both images use a combination of infrared and visible light to increase the contrast between water and earth.

Dark blue and black water covers much of the bright green, plant-covered land in the top image. The most extensive flooding appears to be concentrated around the city of Villahermosa, Tabasco’s capital. The city’s man-made surfaces give it a cement-gray color in these images. To the north and west of the city, the Grijalva River is swollen. Smaller rivers and wetlands around the city are overflowing with water so that the city appears to be entirely surrounded. Blue tints over the city itself point to urban flooding, though scattered clouds (light blue and white in this type of image) hide the full extent of the flooding within the city. Beyond Villahermosa, the wetlands and lagoons that span the space between the Grijalva and Usumacinta Rivers are also clearly inundated.

The floods were so extensive that the governor of Tabasco estimated that half of the state’s 2.1 million people were affected, said the United Nations Office for the Coordination of Humanitarian Affairs (OCHA) on November 3. At least 69,000 people had been evacuated to emergency shelters and another 350,000 remained trapped in their homes, said OCHA. Many of those forced from their homes lived in Villahermosa, 519 neighborhoods of which were flooded with water rising as high as the second floor of many homes. The rains and floods damaged roads and destroyed all crops throughout Tabasco. Mexico’s president, Felipe Calderon, numbered the floods among the worst natural disasters in the country’s history, said OCHA.

Daily images of southeastern Mexico are available from the MODIS Rapid Response System in both false color, as shown here, and photo-like true color.