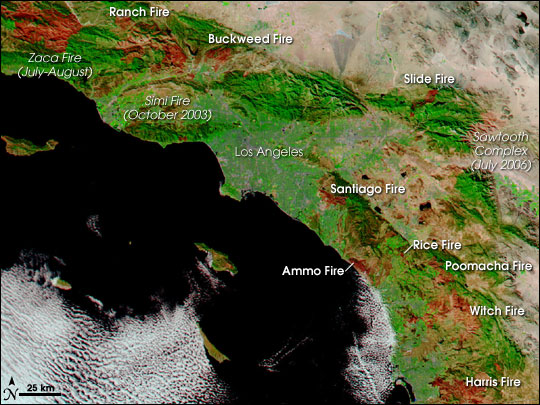 The explosive wildfires of October 2007 in Southern California killed several people, scorched hundreds of thousands of acres, and destroyed more than two thousand homes. Based on acres burned, two of the fires, the Witch and Harris Fires, climbed into the record books of the state’s 20 largest wildfires (based on statistics kept since the early 1930s.) In terms of structures burned, four of the October fires made the list of the top 20 largest fires: the Witch, Harris, Slide, and Rice Fires. As of November 5, 2007, nearly 1.3 million acres had burned in wildfires in Southern California. That total included the 240,000-acre Zaca Fire, which burned during July and August.

This image of Southern California, centered on Los Angeles, shows how widespread and large the October 2007 fires were. Captured by the Moderate Resolution Imaging Spectroradiometer (MODIS) on NASA’s Terra satellite on October 31, the image is made from a combination of visible and infrared light to make burned areas (brick red) stand out from unburned vegetation (bright green). Desert or semi-arid landscapes are beige, dense urban areas are gray, and water is dark blue. Burn scars from previous seasons, such as the 2006 Sawtooth Complex Fire and the 2003 Simi Incident Fire have faded to light pink.

This type of false-color imagery helps natural resource managers begin the process of Burned Area Emergency Rehabilitation (BAER). BAER teams are usually on the ground even before fires are totally contained, and their job is to evaluate the risk of further damage to life, property, or natural resources from post-fire erosion and flooding.

Although higher-resolution (more detailed) imagery is necessary for precise mapping of specific hillsides or ravines burned in a fire, the moderate level of detail that images from the MODIS sensors on NASA’s Terra and Aqua satellites provide is still valuable. With most satellite imagery, the higher the resolution of the image, the less area the sensor can see at once. For very large or fast-moving fires, the limited coverage means that BEAR officials might have to wait several weeks for the first high-resolution images of the entire burned area—:and several more weeks for follow-up images. The moderate-resolution MODIS images cover a wide area on a daily basis, which gives natural resource managers a first look at the situation and can help them decide which fires need to be followed up with high-resolution imagery and ground-based assessments.

To see where these fires occurred in relation to cities, towns, and natural areas, view the 250-meter resolution KMZ file with Google Earth.