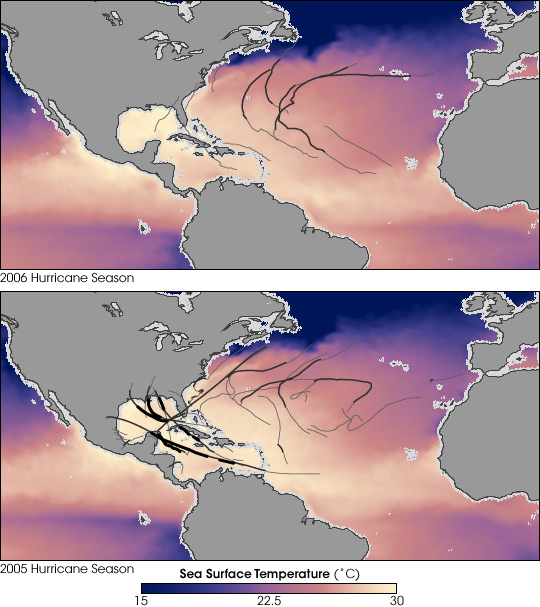 The temperature “threshold” needed for hurricanes to form is about 28 degrees Celsius (about 82 degrees Fahrenheit). In 2005, a much larger area of the Atlantic Ocean and Caribbean Sea was at or near that threshold. The difference between the two seasons is particularly noticeable in the waters east of Florida and north of South America, which have much more yellow in 2005 than 2006.

Why the difference between 2005 and 2006? William Lau of NASA Goddard Space Flight Center and Kyu-Myong Kim of University of Maryland-Baltimore County think the answer comes from the Sahara, namely dust. Using dust observations collected by the Ozone Monitoring Instrument (OMI) on NASA’s Aura satellite, they found that the Sahara sent an unusually large amount of dust over the Atlantic during the 2006 hurricane season. By blocking incoming sunlight, the researchers say, the dust could have caused the widespread cooling of the subtropical North Atlantic Ocean, subduing hurricanes. The researchers don’t yet know how great a part dust played in derailing hurricane formation in 2006, but they hope their work will fuel more studies.

Warm sea surface temperatures help fuel hurricanes, and in 2006, those temperatures were cooler than expected. Why the difference between 2005 and 2006? William Lau of NASA Goddard Space Flight Center and Kyu-Myong Kim of University of Maryland-Baltimore County think the answer comes from the Sahara, namely dust.