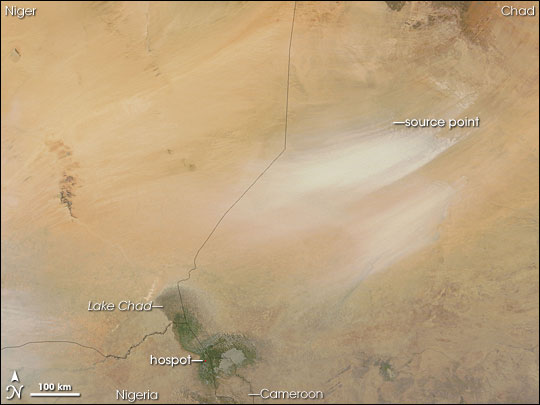 On April 11, 2007, the Moderate Resolution Imaging Spectroradiometer (MODIS) on NASA’s Terra satellite captured dual dust plumes blowing out of the Bodele Depression toward Lake Chad. In this image, the dust plumes appear as feathery brushes of off-white on a darker tan landscape. Close inspection shows some of the source points for the dust storm—the locations where dust is initially borne aloft. To the southwest of the dust plumes, Lake Chad sports a hotspot where MODIS has detected unusually warm surface temperatures, indicating a fire.

Situated south of the Tibesti Mountains and east of the Ennedi Mountains, the Bodele Depression endures regular winds as air masses are squeezed between the mountain ranges. Once aloft, the dust often continues traveling—sometimes all the way across the Atlantic. Research published in 2006 concluded that the Bodele Depression actually fertilizes the Amazon Rainforest in South America.

Lake Chad, which straddles the borders of four nations, has gradually shrunk for decades. The fire along its margin in this image shows how dry the area has become.