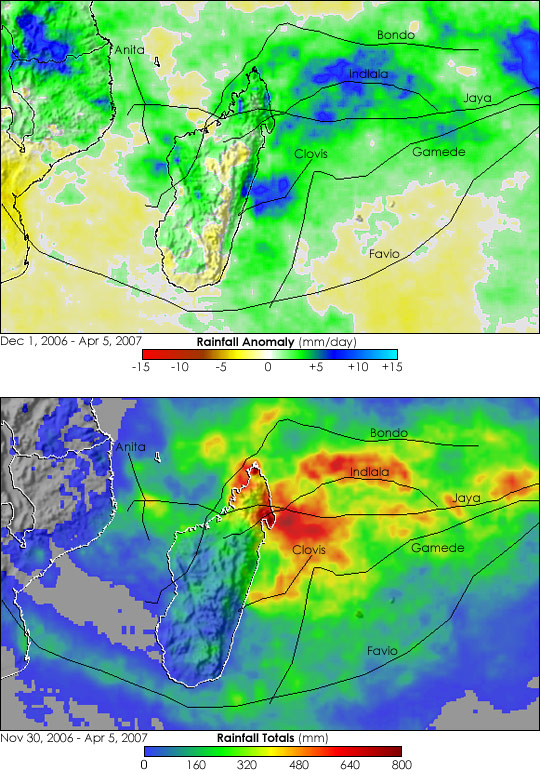 When Cyclone Jaya came ashore over northern Madagascar on April 2, 2007, it was the fourth cyclone to do so since December 2006. Three other cyclones passed near enough during that period to drench the southern African island nation. Two weeks before Jaya struck, Cyclone Indlala cut across the island. Favio and Gamede brought rain to the region in February, and Clovis, Bondo, and Anita all struck Madagascar in December. The cumulative effect of the seven cyclones was widespread flooding and displacement in the northern half of the country, reported the United Nations Office for the Coordination of Humanitarian Affairs (OCHA).

This pair of images shows the rainfall the storms brought to the region based on measurements made by the Tropical Rainfall Measuring Mission (TRMM) satellite. The top image compares the total rainfall between December 1, 2006, and April 5, 2007, with the average totals recorded during the same four-month period between 1996 and 2006. The anomaly reveals that northern Madagascar and parts of mainland Africa received more rain than normal between December 1, 2006, and April 5, 2007, along the tracks of the storms. The southern half of Madagascar was in extreme drought, which is also illustrated by this image. The pale yellow regions indicate where less rain fell than normal.

The lower image illustrates cyclone-related rainfall totals from November 30, 2006, when Cyclone Anita formed, to April 5, 2007, as Cyclone Jaya was dissipating. Rainfall not related to the cyclones was removed from the total. The highest rainfall is shown in red and is concentrated in northern Madagascar where the storms came ashore. During this five-month period, TRMM recorded up to 790.6 millimeters (31.1 inches) of rain off the north coast of Madagascar.