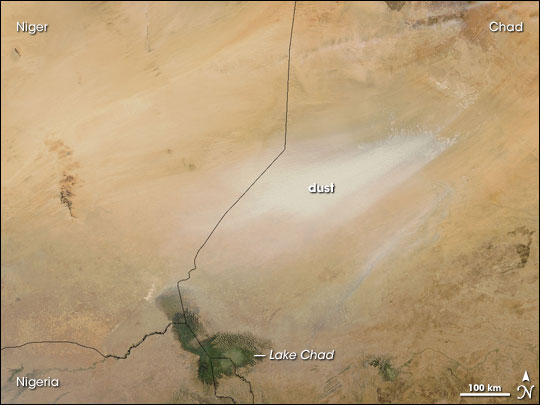 In this image, two off-white plumes of dust blow toward the southwest. The northern plume is much larger and more intense than the southern plume. Because the Bodele Depression sits between two mountain ranges in Chad, it is downwind from a natural wind tunnel. A research paper published in 2006 concluded that some 40 million tons of Bodele Depression dust reach the Amazon basin each year, accounting for half of the Amazon’s dust supply. Further, the researchers found that the minerals in this dust play a crucial role in fertilizing the Amazon’s vegetation.

Closer to the source, considerable amounts of Bodele Depression dust regularly blow toward Lake Chad. Although the dust thins near the lake, a veil of dust appears west of the lake.