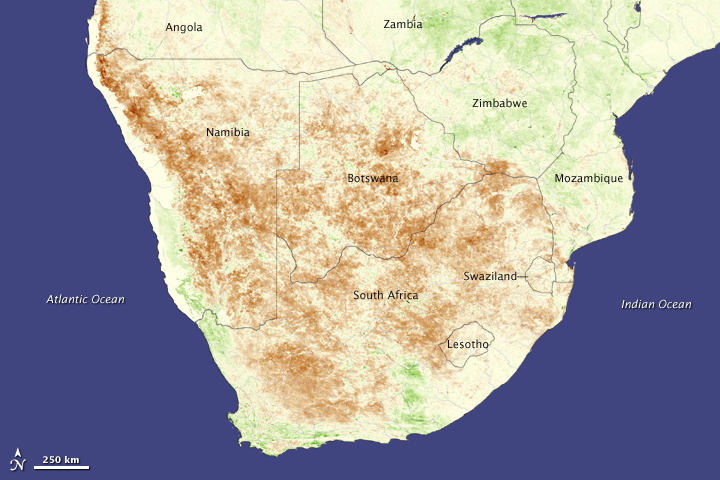 Hot, dry weather from January through March 2007 wilted crops in southern Africa. The severe drought produced near-record temperatures that, combined with a lack of rainfall, caused extensive crop damage, particularly in western crop areas, reported the United States Department of Agriculture’s Foreign Agricultural Service. In South Africa, the anticipated yield from the corn crop dropped from ten million tons in December to six million tons in April because farmers couldn’t plant in the dry conditions and many of the crops that were planted wilted in the dry heat. The last South African drought of this magnitude occurred in 1992.

The impact of the drought on vegetation throughout southern Africa is illustrated in this image. The image shows vegetation conditions in March 2007 compared to conditions during the average March between 1999 and 2006 as measured by the SPOT satellite. Brown areas show where plants were less thick or where fewer plants grew than average. Green areas, by contrast, indicate that vegetation was thicker and more lush than average.

The prevalence of brown indicates that plants were growing poorly throughout the region because of the drought. Green dominates in Zambia, Zimbabwe, and Mozambique along the top edge of the image, where heavy rains triggered floods during January and February. Some of the most severe flooding occurred along the Zambezi River, which is outlined in dark green in the upper-right corner of the image. Clearly, January and February’s excess rain fed dense vegetation in March.