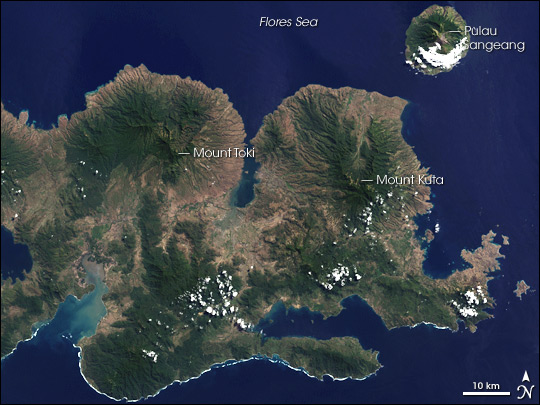 Indonesia’s Sumbawa Island is one of the Lesser Sunda Islands in the Flores Sea. Like its neighbors, Sumbawa sits along the Sunda Arc—a chain of volcanic islands that forms as one tectonic plate slides below another. Lines of volcanoes emerge from these unsettled zones, looking vaguely like the haphazard spine of a submerged giant.

NASA’s Landsat 7 satellite captured this image of Sumbawa, Indonesia on July 20, 2000. Of the three volcanoes shown here, two—Mount Toki and Mount Kuta— have merged together to form a larger island while Pulau Sangeang remains isolated in the north. Mount Kuta bears a striking example of a breached caldera. When a lake forms in the caldera of a volcano, sometimes the weight of the water breaks through one side. The northward path the water took down the volcano’s flank is visible even from space; it scoured a “half-pipe” shape that reaches from the summit nearly to the ocean.

This natural-color image shows not just volcanic features but also vegetation mixed with areas of bare, brown rock. The lush greenness demonstrates the islands ’ ability to recover from previous eruptions. Despite the vegetation’s resilience, however, seismic activity takes a continuing toll on the region. Besides the Sumatra earthquake and ensuing tsunami in December 2004, Indonesia has endured frequent volcanic eruptions and associated quakes, as well as a mud volcano that flooded a large area.

Bouganville Island is geographically part of the Solomon Islands chain to the east of Papua New Guinea. (Politically, the island is part of Papua New Guinea.) Bouganville is typical of many Pacific Rim islands in that volcanism has played a large part in both its geological and recorded history. The island hosts three large volcanoes along its northwest-southeast trending axis: Mount Balbi, Mount Bagana, and the Mount Takuan volcanic complex. Mount Bagana, located near image center in this astronaut photograph, is the only historically active volcano on the island.